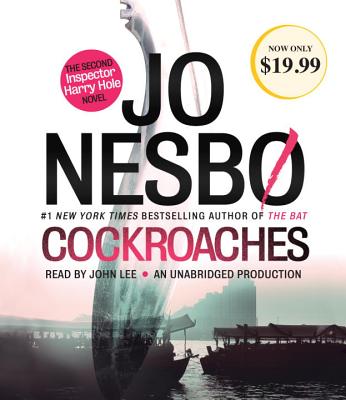 #1 NEW YORK TIMES BESTSELLER • In this installment of the New York Times bestselling series, Jo Nesbo sends Inspector Harry Hole to Thailand to investigate the murder of an ambassador.

“I can’t think of anyone who makes my skin crawl like Nesbo."—The New York Times Book Review

When the Norwegian ambassador to Thailand is found dead in a Bangkok brothel, Inspector Harry Hole is dispatched from Oslo to help hush up the case. But once he arrives Harry discovers that this case is about much more than one random murder. There is something else, something more pervasive, scrabbling around behind the scenes. Or, put another way, for every cockroach you see in your hotel room, there are hundreds behind the walls. Surrounded by round-the-clock traffic noise, Harry wanders the streets of Bangkok lined with go-go bars, temples, opium dens, and tourist traps, trying to piece together the story of the ambassador’s death even though no one asked him to, and no one wants him to—not even Harry himself.

"The world is dark and frozen, according to Nordic noir, and so is the human heart.
But it's the magic Nesbø works with the genre's tropes that matters.... [He] might be my favorite of the lot."—Michael Robbins, Chicago Tribune

“Excellent ... the most popular among [Nesbø’s] earlier novels and one that casts a cold eye on the reality of expatriate life of some Europeans in Asia.”—The Irish Independent

“The complex narrative and large dramatis personae are handled with steely authority ... The picturesque seediness of Bangkok and Thailand turns out to be Harry Hole's natural element, with Nesbo plumping his hero down in a very non-Norwegian setting.”—The Independent (UK)

“Nesbø writes like an angel. As in Lucifer.”—The Philadelphia Inquirer

“Harry Hole is fast becoming one of the planet’s favorite detectives. And his demons are almost as legendary as his observational and analytical skills.”—The Mirror (UK)

“Nesbø explores the darkest criminal minds with grim delight and puts his killer where you least expect to find them.... His novels are maddeningly addictive.”—Vanity Fair

JO NESBO is a musician, songwriter, economist, and #1 New York Times bestselling author. He has won the Raymond Chandler Award for Lifetime Achievement as well as many other awards. His books have sold 50 million copies worldwide and have been translated into 50 languages. His Harry Hole novels include The Redeemer, The Snowman, The Leopard, Phantom, and Knife, and he is also the author of The Son, The Kingdom, Headhunters, Macbeth, and several children's books. He lives in Oslo.
Loading...
or
Not Currently Available for Direct Purchase