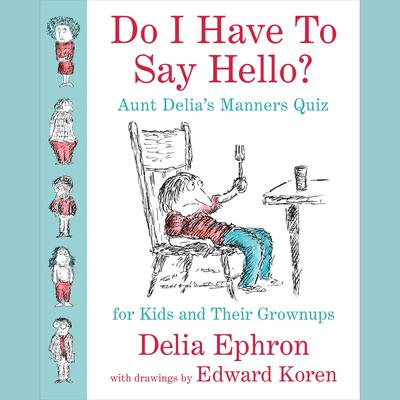 Do I Have to Say Hello? Aunt Delia's Manners Quiz for Kids and Their Grown-ups (Digital Audiobook)

Twenty-five years after its original publication, Do I Have to Say Hello? Aunt Delia’s Manners Quiz for Kids and Their Grown-ups is back, and do we and our kids all need it. In a series of light-hearted multiple choice quizzes, alternate scenarios, and true-or-false questions, Delia Ephron and Edward Koren, the author and illustrator team who brought us the best-selling How to Eat Like a Child, depict a range of possibilities that reflect life as it is as well as life as it ought to be. Covering table manners, car manners, playground manners, school manners, and more, this is a book that is sure to delight (and horrify) adults and children of all ages.

Aunt Delia knows what makes the difference between a pleasant and an excruciating visit to a friend’s house in the company of a young child. She knows the proper order in which the following actions take place: (a) Throw up; (b) Get out of the car; (c) Ask Uncle Jerry to pull over. In short, she is practical and basic: she does not get into fish forks, but she knows what to do with bubble gum. She also deals with such things as kindness, sharing, consideration, generosity, and diplomacy. Delia Ephron’s painfully on-target text is complemented by Edward Koren’s hilarious drawings, which–as ever–present us not as we might wish to appear, but as we really are.

Delia Ephron is a bestselling author and screenwriter. Her movies include The Sisterhood of the Traveling Pants, You've Got Mail, Hanging Up (based on her novel), and Michael. She has written novels for adults and teenagers, including her most recent, The Lion Is In; books of humor, including How to Eat Like a Child; and essays. Her journalism has appeared regularly in The New York Times, O: The Oprah Magazine, Vogue, More, and The Huffington Post. Her hit play Love, Loss, and What I Wore (cowritten with Nora Ephron) ran for more than two years off-Broadway and has been performed all over the world, including in Paris, Rio, and Sydney. She lives in New York City.

Edward Koren, a cartoonist and illustrator is a regular contributor to The New Yorker. Among his many books are How to Eat Like a Child and Teenage Romance, both published with Delia Ephron.