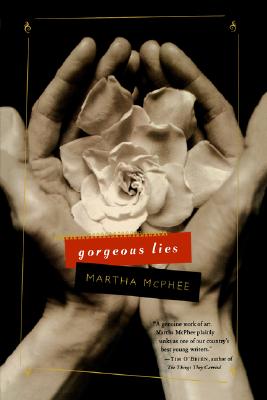 Returning to the Furey-Cooper family Martha McPhee introduced in Bright Angel Time, Gorgeous Lies opens two decades later. Charismatic therapist Anton Furey is dying, and the tribe he heads--his five children, his wife's three girls, and their uniting child, Alice--has returned to Chardin, the farm where they grew up and Anton played out his visions of communal living. Chronicled by film crews and reporters, they had been famous for being the new American blended family. But as Anton grows weaker, the hurts, allegiances, and betrayals of those years boil to the surface, and the children find themselves reliving the knotty intimacy they share as they struggle to make their peace with Anton and Anton struggles to make peace with himself.
McPhee has already established herself as an acclaimed new talent; now she fulfills her promise. With shimmering prose and an acutely observant eye, she has created a portrait of an era and a family that explores the limits, and obligations, of love.

"Blessed with a poet's ear for language and a reporter's eye for detail, she proves with this volume that she is also a gifted novelist, a writer with the ability to surprise and move us."--Michiko Kakutani, The New York Times

"Full of beautiful writing and dead-on observations about the era that spawned broken families and broken hearts . . . McPhee's saga will haunt anyone who has ever felt lost on even the firmest of ground."--Glamour

"McPhee brings sensitivity and insight to her account.... She is an immensely gifted novelist."

"I loved this book. Martha McPhee plainly ranks as one of our country's best young writers."
-Tim O'Brien

"McPhee is a sensuous stylist."

"[McPhee]'s prose captures the Chardin mood: Elegant and airy, it seems to levitate even the grubbiest details."

"An unusually strong novel [that] explores the wild frontier of domestic life."

"When McPhee strikes the right rhythm, you don't so much read her prose as live inside it."

"It's easy to see why the charismatic figures from BRIGHT ANGEL TIME would not loosen their grip on this author."

Martha McPhee is a Bowdoin graduate and received an M.F.A. from Columbia University. Her work has appeared in the" New Yorker, Redbook, Open City, Harper's Bazaar," and other journals. She is the author of "Bright Angel Time," a "New York Times" Notable Book, and coauthor with Jenny and Laura McPhee of "Girls." She lives in New York City.
Loading...
or
Not Currently Available for Direct Purchase