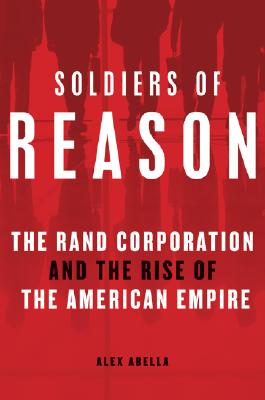 The RAND Corporation and the Rise of the American Empire

The first-ever popular history of the RAND Corporation, written with full access to its archives, "Soldiers of Reason "is a page-turning chronicle of the rise of the secretive think tank that has been the driving force behind American government for sixty years.

Born in the wake of World War II as an idea factory to advise the air force on how to wage and win wars, RAND quickly became the creator of America's anti-Soviet nuclear strategy. A magnet for the best and the brightest, its ranks included Cold War luminaries such as Albert Wohlstetter, Bernard Brodie, and Herman Kahn, who arguably saved us from nuclear annihilation and unquestionably created Eisenhower's "military-industrial complex."

In the Kennedy era, RAND analysts became McNamara's Whiz Kids and their theories of rational warfare steered our conduct in Vietnam. Those same theories drove our invasion of Iraq forty-five years later, championed by RAND affiliated actors such as Paul Wolfowitz, Donald Rumsfeld, and Zalmay Khalilzad. But RAND's greatest contribution might be its least known: rational choice theory, a model explaining all human behavior through self-interest. Through it RAND sparked the Reagan-led transformation of our social and economic system but also unleashed a resurgence of precisely the forces whose existence it denied-- religion, patriotism, tribalism.

With "Soldiers of Reason, "Alex Abella has rewritten the history of America's last half century and cast a new light on our problematic present.


Praise For Soldiers of Reason: The RAND Corporation and the Rise of the American Empire…

• The main character in stanley Kubrick’s Dr. Strangelove, or How I Learned to Stop Worrying and Love the Bomb is based on RAND analyst Herman Kahn.

• JFK may have owed his presidency to his RAND advisors, who provided him information about America’s weak defenses and the so-called “missile gap” that heavily favored the Soviet Union. as it turns out, there was no missile gap—an estimate of five hundred soviet ICBMs was later amended to fifty.• Thank RAND for the cost-sharing features of our health care: under Nixon, RAND carried out a massive multiyear study of the health-care system that ushered in the widespread use of deductibles and co-payments.
or
Not Currently Available for Direct Purchase
Copyright © 2020 American Booksellers Association