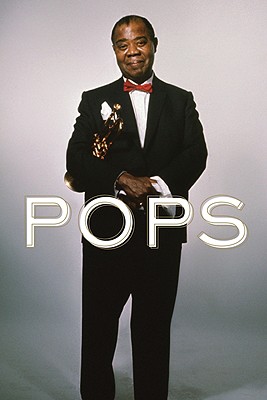 A Life of Louis Armstrong

Louis Armstrong was the greatest jazz musician of the twentieth century and a giant of modern American culture. He knocked the Beatles off the top of the charts, wrote the finest of all jazz autobiographies - without a collaborator - and created collages that have been compared to the art of Romare Bearden. The ranks of his admirers included Johnny Cash, Jackson Pollock and Orson Welles. Offstage he was witty, introspective and unexpectedly complex, a beloved colleague with an explosive temper whose larger-than-life personality was tougher and more sharp-edged than his worshipping fans ever knew."

Wall Street Journal" arts columnist Terry Teachout has drawn on a cache of important new sources unavailable to previous Armstrong biographers, including hundreds of private recordings of backstage and after-hours conversations that Armstrong made throughout the second half of his life, to craft a sweeping new narrative biography of this towering figure that shares full, accurate versions of such storied events as Armstrong's decision to break up his big band and his quarrel with President Eisenhower for the first time. Certain to be the definitive word on Armstrong for our generation, "Pops" paints a gripping portrait of the man, his world and his music that will stand alongside Gary Giddins' "Bing Crosby: A Pocketful of Dreams" and Peter Guralnick's "Last Train to Memphis: The Rise of Elvis Presley" as a classic biography of a major American musician.


Praise For Pops: A Life of Louis Armstrong…

"Ultimately, Teachout's fine biography shows how much of Armstrong's love of music--and people--was behind that signature million-watt smile." -- Booklist "Teachout's portrait reminds us why we fell in love with Armstrong's music in the first place." --Publishers Weekly "A comprehensive, affectionate biography of arguably the single most important figure in the history of jazz...A rewarding jazz biography and a revealing look at a broad swath of American cultural history." --Kirkus Reviews "Best of all, it smartly--and simply--finds unity in contradiction." --Atlantic Monthly "Teachout delivers a taut and well-paced work that is astute in its critical judgments and gripping in its chronicle of the trumpeter's life and times." --The Weekly Standard

"...terrific biography..." --The Sunday Times (UK)"With 'Pops,' his eloquent and important new biography of Armstrong, the critic and cultural historian Terry Teachout restores this jazzman to his deserved place in the pantheon of American artists..." --The New York Times"With prodigious research and a good deal of stylistic grace, the cultural critic has produced a biography as definitive as it is incolclusive about the sources of Armstrong's artistic genius and contradictory personality." --The Cleveland Plain Dealer"...the most comprehensive and pleasurable account yet of the trumpeter's complex life and personality. Teachout's vivid and accessible portrayal of Armstrong is one of the book's great pleasures: He will make a fan of the most skeptical reader." --Kansas City Star"...compelling..." --The Los Angeles Times "Teachout adopts a sophisticated street-level style that mirrors what he loves best about the man known as Satchmo: Armstrong's ability (and willingness) to synthesize high and low culture for an audience as broad as his grin." --Time Out New York"...a masterpiece." --Seattle Times"Teachout excels at conveying the interplay between Armstrong the artist and Armstrong the entertainer, and at examining the particular challenge of his legacy." --The New Yorker

"Teachout''s portrait reminds us why we fell in love with Armstrong''s music in the first place."

"A comprehensive, affectionate biography of arguably the single most important figure in the history of jazz...A rewarding jazz biography and a revealing look at a broad swath of American cultural history."