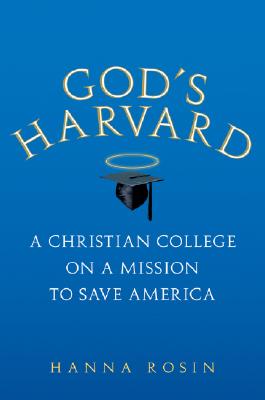 A Christian College on a Mission to Save America

Since 2000, America’s most ambitious young evangelicals have been making their way to Patrick Henry College, a small Christian school just outside the nation’s capital. Most of them are homeschoolers whose idealism and discipline put the average American teenager to shame. And God’s Harvard grooms these students to be the elite of tomorrow, dispatching them to the front lines of politics, entertainment, and science, to wage the battle to take back a godless nation. Hanna Rosin spent a year and a half embedded at the college, following the students from the campus to the White House, Congress, conservative think tanks, Hollywood, and other centers of influence. Her account captures this nerve center of the evangelical movement at a moment of maximum influence and also of crisis, as it struggles to avoid the temptations of modern life and still remake the world in its own image.


Praise For God's Harvard: A Christian College on a Mission to Save America…

"God''s Harvard: A Christian College on a Mission to Save America, is a rare accomplishment for many reasons - perhaps most of all because Rosin is a journalist who not only reports but also observes deeply. Her insights come through in her balanced portrayal of each student, the nuance with which she inserts her own first-person narration, and - not least - her dry and sometimes acerbic sense of humor."

"Whether these kids terrify or delight you has everything to do with your political and religious views but, one way or the other, they are people that you should probably start getting to know. God''s Harvard: A Christian College on a Mission to Save America by Hanna Rosin offers an intriguing introduction."

"A superb work of extended reportage ..."

" ... how can a school introduce some of the country''s most sheltered youth to the ways of the secular world--even in hopes they will reshape it--without their being corrupted in the process? It''s a dilemma that makes for constant tension in Hanna Rosin''s nuanced and highly readable God''s Harvard."

"Hanna''s Rosin''s wonderful book is as insightful as it is witty. Rarely is a book on such an important subject such a joy to read."
-Alan Wolfe, author of One Nation After All

"Hanna Rosin has gotten incredible access to a subculture that is fast becoming a mighty political force. This insightful book reveals the new face of the Christian Right: highly educated young people brilliantly trained to advance their world view into mainstream America. Rosin''s frank and candid portraits of these fiercely dedicated youth leave the reader wondering: what will my world be like when these kids are in charge of it?"
-Rachel Grady, director and producer, Jesus Camp

"I believe deeply in this amazing book by Hanna Rosin. With clarity, honesty, and equal measures of surprised delight and foreboding, she takes us into a new world of Christian higher education that few outsiders knew existed but the entire nation will be dealing with for decades to come."
-David Maraniss, author of First in His Class

"By reporting among America''s young Christian elite with curiosity, empathy, and persistence, Hanna Rosin has produced a book that is humane, surprising, and very unnerving. This is journalism at its best--never preachy, but honest and revealing."
-Steve Coll, author of Ghost Wars

"Hanna Rosin reminds us in God''s Harvard why there is no substitute for good reporting and beautiful story telling. Rosin enters some of the most contested terrain of American public life, the world of evangelical Christianity, and provides readers with both an outsider''s view and an insider''s perspective. Human beings, not stick figures, populate this book, reflecting Rosin''s approach, which is simultaneously tough-minded and sensitive. Readers who never expected to read about this subject will find themselves drawn in, and fascinated."
-E.J.Dionne Jr., author of Why Americans Hate Politics

"It''s easy, based on the book''s title alone, to assume that Rosin is out to demonize the young evangelicals at Patrick Henry, to damn them in the scathing light of their own inflexible beliefs…But Rosin is a better and more honest writer than that. Despite her own aversion to fundamentalist dogma…she steers largely clear of political ax-grinding."

Lively and evenhanded...reveals the evangelical movement at a moment of crisis and climax, its future leaders struggling to resist the temptations of modern life even as they try to remake the world in their image.