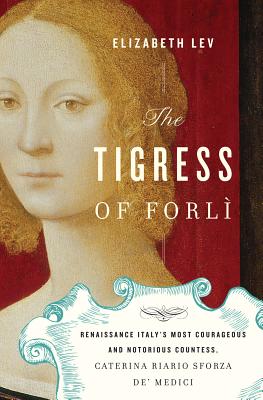 The Tigress of Forli

“A rich, nuanced portrait of a highly controversial beauty and military leader, and her violent albeit glittering Italian Renaissance milieu.”—Publishers Weekly

A strategist to match Machiavelli; a warrior who stood toe to toe with the Borgias; a wife whose three marriages would end in bloodshed and heartbreak; and a mother determined to maintain her family’s honor, Caterina Riario Sforza de’ Medici was a true Renaissance celebrity, beloved and vilified in equal measure. In this dazzling biography, Elizabeth Lev illuminates her extraordinary life and accomplishments.
Raised in the court of Milan and wed at age ten to the pope’s corrupt nephew, Caterina was ensnared in Italy’s political intrigues early in life. After turbulent years in Rome’s papal court, she moved to the Romagnol province of Forlì. Following her husband’s assassination, she ruled Italy’s crossroads with iron will, martial strength, political savvy, and an icon’s fashion sense. In finally losing her lands to the Borgia family, she put up a resistance that inspired all of Europe and set the stage for her progeny—including Cosimo de’ Medici—to follow her example to greatness.

A rich evocation of Renaissance life, The Tigress of Forlì reveals Caterina Riario Sforza as a brilliant and fearless ruler, and a tragic but unbowed figure.

"A rich account of a dramatic and tragic life: a tale of murder, childhood marriage, revenge, rape, accession to power by a Florentine woman, and a violent downfall. Lev offers a rich, nuanced portrait of a highly controversial beauty and military leader and her violent albeit glittering Italian Renaissance milieu." — Publishers Weekly"An engrossing biography of one of Renaissance Italy’s most accomplished powerbrokers. The author writes with a light touch and an eye for the pageantry and drama of the time—her subject was known as one of the best-dressed women in Italy—while colorfully recounting weighty affairs of state. An inspiring tale of the courage and fortitude of an enigmatic and indomitable woman."—Kirkus"Lev continues the recent biographical trend of unearthing extraordinary women from the historical dustpile. The Renaissance is hot right now, and this well-researched biography is a welcome addition to the reexamination of the era." —Booklist

ELIZABETH LEV is a scholar of Renaissance art and culture and professor of Art History in Rome, where she lives with her family. This is her first book.