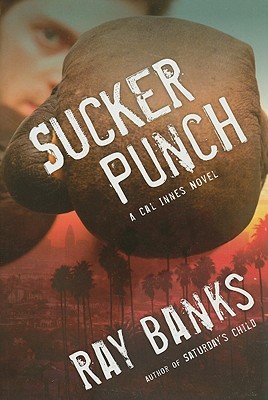 Cal Innes is back, in a “ferocious asskicker of a novel” (Daniel Woodrell, author of Winter’s Bone), visiting the City of Angels for a boxing tournament that turns deadly.
In this, the second Cal Innes novel, Cal is looking forward to continuing his job as caretaker at Paulo’s gym without the barbed-wire collar of parole. But a prodigal amateur boxer named Liam needs someone to go with him to his first major tournament in Los Angeles, and with rumors of a rigged competition, Cal’s babysitting job swiftly turns into something dangerous. As his codeine habit and Liam’s temper spin out of control, Cal finds himself in the desert, staring down the barrel of a gun. Suddenly the City of Angels doesn’t seem quite so heavenly.
With his trademark dark humor, emotional acuity, and pulse-pounding action, Ray Banks takes Cal Innes, the “P.I.
who always pays the price” (Boston Globe), where he has never gone before.

"Sucker Punch hooks you with its emotional honesty, knocks the wind out of you with its relentless prose, and holds you in its inescapable clinch with a rippling-muscled plot. It’s a ringside seat at a boxing match between Jim Thompson and Charles Bukowski refereed by Chuck Palahniuk. Ray Banks is the UK heavyweight champ of literary noir."—Allan Guthrie, author of Savage Night

Ray Banks has been a double-glazing salesman, a croupier, a dole monkey, and a disgruntled temp. The author of The Big Blind, Saturday’s Child, Sucker Punch, and No More Heroes, he was born in Kirkcaldy, Scotland, and now lives in Edinburgh.
Loading...
or
Not Currently Available for Direct Purchase