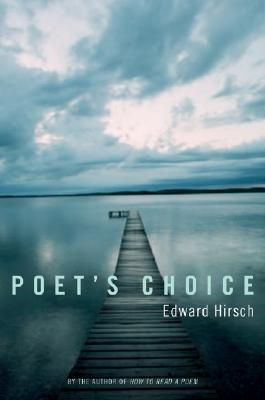 Edward Hirsch began writing a column in the Washington Post Book World called "Poet's Choice" in 2002. This book brings together those enormously popular columns, some of which have been revised and expanded, to present a minicourse in world poetry; Poet's Choice includes the work of more than 130 poets-from Asia and the Middle East to Europe and America, from ancient times to the present-and demonstrates how poetry responds to the challenges of our modern world. Rich, relevant, and inviting, the book reveals how poetry both puts us in touch with ourselves and connects us to each other.

I don't want to go on being a root in the dark,
Insecure, stretched out, shivering with sleep,
Going on down, into the moist guts of the earth,
Taking in and thinking, eating every day.

I don't want so much misery.
I don't want to go on as a root and a tomb,
Alone under the ground, a warehouse with corpses,
Half frozen, dying of grief.
-from "WALKING AROUND" by PABLO NERUDA,
translated by ROBERT BLY

PRAISE FOR HOW TO READ A POEM
"In short, reading Hirsch's How to Read a Poem is like a very long evening with a learned and perceptive friend who keeps leaping to his bookshelf for more and better illustrations, and finding ever more connections and revelations."-NEWSDAY

"A lovely book, full of joy and wisdom."-THE BALTIMORE SUN

EDWARD HIRSCH is a celebrated poet and peerless advocate for poetry. A MacArthur fellow, he has published nine books of poems and five books of prose. He has received numerous awards and fellowships, including a National Endowment for the Arts Fellowship, the Rome Prize, a Pablo Neruda Presidential Medal of Honor, and the American Academy of Arts and Letters Award for Literature. He serves as president of the John Simon Guggenheim Memorial Foundation and lives in Brooklyn.