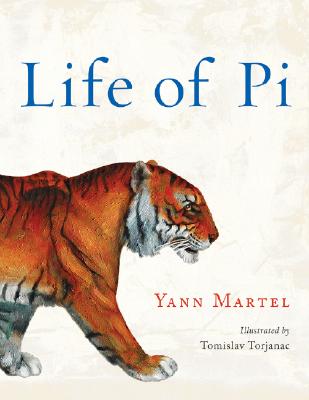 Will the tiger be menacing; will the ocean be threatening; will the island be something out of "Frankenstein" or will it be an Eden? Yann Martel
"Life of Pi, " first published in 2002, became an international bestseller and remains one of the most extraordinary and popular works of contemporary fiction.
In 2005 an international competition was held to find the perfect artist to illustrate Yann Martel's Man Booker Prize winning novel. From thousands of entrants, Croatian artist Tomislav Torjanac was chosen. This lavishly produced edition features forty of Torjanac's beautiful four-color illustrations, bringing "Life of Pi" to splendid, eye-popping life.
Tomislav Torjanac says of his illustrations: My vision of the illustrated edition of "Life of Pi" is based on paintings from a first person's perspective Pi's perspective. The interpretation of what Pi sees is intermeshed with what he feels and it is shown through the] use of colors, perspective, symbols, hand gestures, etc.

"Let me tell you a secret: the name of the greatest living writer of the generation born in the sixties is Yann Martel."--L'Humanité

"A story to make you believe in the soul-sustaining power of fiction and its human creators, and in the original power of storytellers like Martel." -- Los Angeles Times Book Review
“If this century produces a classic work of survival literature, Martel is surely a contender.’--The Nation
"Beautifully fantastical and spirited." -- Salon

"[Life of Pi] could renew your faith in the ability of novelists to invest even the most outrageous scenario with plausible life." -- The New York Times Book Review

"Audacious, exhilarating . . . wonderful. The book's middle section might be the most gripping 200 pages in recent Canadian fiction. It also stands up against some of Martel's more obvious influences: Edgar Allen Poe's The Narrative of Arthur Gordon Pym, the novels of H. G. Wells, certain stretches of Moby Dick."--Quill & Quire