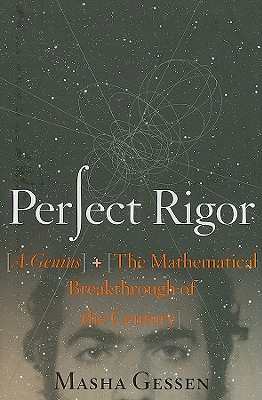 A Genius and the Mathematical Breakthrough of the Century

In 2006, an eccentric Russian mathematician named Grigori Perelman solved the Poincare Conjecture, an extremely complex topological problem that had eluded the best minds for over a century. A prize of one million dollars was offered to anyone who could unravel it, but Perelman declined the winnings, and in doing so inspired journalist Masha Gessen to tell his story. Drawing on interviews with Perelman's teachers, classmates, coaches, teammates, and colleagues in Russia and the United States--and informed by her own background as a math whiz raised in Russia--Gessen uncovered a mind of unrivaled computational power, one that enabled Perelman to pursue mathematical concepts to their logical (sometimes distant) end. But she also discovered that this very strength turned out to be Perelman's undoing and the reason for his withdrawal, first from the world of mathematics and then, increasingly, from the world in general.


Praise For Perfect Rigor: A Genius and the Mathematical Breakthrough of the Century…

PERFECT RIGOR: A Genius and the Mathematical Breakthrough of the Century

The story of Russian mathematical prodigy Grigory Perelman, who solved a problem that had stumped everyone for a century—then walked away from his chosen field.

Gessen (Blood Matters: From Inherited Illness to Designer Babies, How the World and I Found Ourselves in the Future of the Gene, 2008, etc.) tells Perelman’s story from the viewpoint of a former student in the educational system of which he was a product. Soviet mathematicians worked in isolation from their Western counterparts during the Stalinist era, but were encouraged because of their value to the state. Perelman, an unusually gifted student, was identified early and his talent nurtured, even though, as a Jew, he faced crippling handicaps under the Soviets. He won the attention of an innovative math coach, Sergei Rukshin. The coach and student bonded early, and Perelman was accepted at a prestigious university and then at a top graduate school. As a star, he was allowed an unusual degree of eccentricity, which in his case included an almost total disregard of other people. Numerous contemporaries attest to his fanatical adherence to a set of ideals that essentially ignored the realities of the Soviet state. Politics, prejudice, making friends and getting ahead in the world—these meant nothing to Perelman. During postdoctoral work in the United States, he refused to cut his hair and nails and turned down job offers because he felt it beneath his dignity to apply for them. Meanwhile, he was homing in on a solution to the Poincaré Conjecture, a topological riddle so puzzling that the Clay Institute in Boston offered a $1 million prize to anyone who could solve it. When, in 2002, Perelman posted a solution on the Internet, he seemed to expect instant recognition. Instead, the world’s mathematicians meticulously checked his proof, which Perelman took it as an insult and turned down a Fields medal, the math equivalent of a Nobel. To this day, there is significant doubt about whether he will accept the Clay prize. Though Gessen was unable to interview her subject, she paints a fascinating picture of the Soviet math establishment and of the mind of one of its most singular products.

An engrossing examination of an enigmatic genius.

The "genius" here is Russian mathematician Grigory Perelman, who announced in 2002 a proof of the PoincarÃƒÂ© Conjecture, a complex problem that had resisted the best efforts of the world''s mathematicians for almost a full century. Strangely, since that moment of apparent triumph, Perelman has progressively withdrawn from contact with the mathematics community and with most other humans as well. Russian American journalist and author Gessen (Slate, New Republic; Blood Matters) now tells of Perelman''s very unconventional life and career. Denied access to Perelman himself, she interviewed many people who knew him as a student and (later) as a researcher. Gessen details the special Russian schools for young mathematical prospects that Perelman attended and describes apparently incorrigible Russian anti-Semitism. Most important, the gist of her excellent discussion of the PoincarÃƒÂ© Conjecture and its proof should be intelligible even to readers lacking a background in higher mathematics. VERDICT General science buffs curious about how researchers go about creating new mathematics or about the eccentric personalities in this field will be fascinated by Gessen''s book. More advanced readers can also turn to Donal O''Shea''s The PoincarÃƒÂ© Conjecture: In Search of the Shape of the Universe.Ã¢Â‚¬Â€?Jack W. Weigel, Ann Arbor, MI