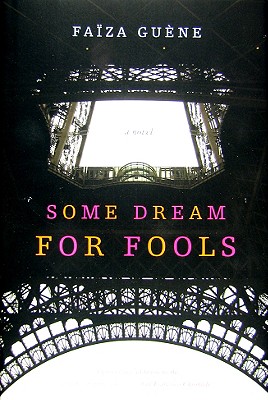 Some Dream for Fools

“The author of Kiffe Kiffe Tomorrow has written another delightful, argot-filled glimpse into the slums outside Paris, this one about 25-year-old Ahleme and her determination to keep her brother out of the local crime scene. Guene's slang-rich voice is pure pleasure.”
— Nick DiMartino, University Book Store, Seattle, WA
View the List

Ahlème, a young woman living on the outskirts of Paris, is trying to make a life out of the dreams she brought with her from Algeria and the reality she faces every day. Her father lost his job after an accident at his construction site. Her mother was lost to a massacre in Algeria. And her brother, Foued, boils with adolescent energy and teeters dangerously close to choosing a life of crime. As she wanders the streets of Paris looking for work, Ahlème negotiates the disparities between her dreams and her life, her youth and her responsibilities, the expectations of those back home and the limitations of life in France. With the same laugh-out-loud, razor-sharp humor that made Kiffe Kiffe Tomorrow an international hit, Some Dream for Fools shows Faïza Guène’s evolution as a novelist and reminds us of her extraordinary talent as she explores what happens to people when a lid is put on their dreams.


Praise For Some Dream for Fools…

Praise for SOME DREAM FOR FOOLS

"Super-young, super-cool and fast becoming known as one of the hottest literary talents of multicultural Europe, Guene takes us on a tour of the tough suburbs of Paris and Algeria, where having the wrong-colour passport sentences you to a half-life. A funny, intimate and timely book by one of the stars of tomorrow." -- Sunday Telegraph, 50 of the best holiday reads (UK)
Praise for KIFFE KIFFE TOMORROWNYTBR Editor's Choice"[C]ompelling... reveals Guene to be a promising addition to the world's literary voices." -- San Francisco Chronicle

"Remarkable . . .  a glimpse of life beyond the Paris city limits and into a new, multicultural France . . . Heralded as, alternately, a Gallic version of White Teeth, The Catcher in the Rye and Bridget Jones's Diary . . . ." -- Salon

"And thanks to [Guène''s] sincerity and her brilliant eye for detail, we, too, quickly understand that while hope may be a mirage, it is a source for humor, wonder, and often dreams, even as she mocks them as only fit for fools."

She is the author of "Kiffe Kiffe Tomorrow."
or
Not Currently Available for Direct Purchase