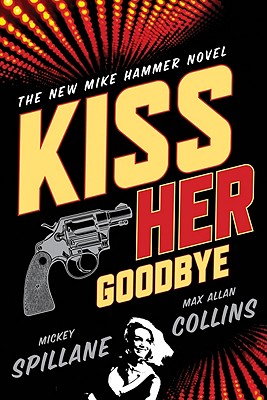 Mike Hammer has been away from New York too long. Recuperating in Florida after a deadly mob shootout, the private eye learns that an old mentor on the New York police force has committed suicide. Hammer returns for the funeral and because he knows that Inspector Doolan would never have killed himself. But Manhattan in the 1970s no longer feels like home. Hammer's lovely longtime partner, Velda, has disappeared after he broke it off for her own safety, and his office is shut down.
When a woman is murdered practically on the funeral home's doorstep, Hammer is drawn into the hunt for a cache of Nazi diamonds that makes the Maltese Falcon seem like a knickknack, and for the mysterious beauty who had been close to Doolan in his final days. But drug racketeers, who had it in for the tough old police inspector, attract Hammer's attention as well. Soon he is hobnobbing with coke-snorting celebrities at the notorious disco Club 52 and playing footsie with a sleek lady D.A., a modern female on the make for oldfashioned Hammer. Everything leads to a Mafia social club where Hammer and his .45 come calling, initiating the wildest showdown since Spillane's classic "One Lonely Night.


Praise For Kiss Her Goodbye: An Otto Penzler Book…

"The violent death of his old cop mentor calls Mike Hammer back to New York and more of the same death-dealing intrigue he first made his specialty in I, the Jury 64 years ago.

According to Capt. Pat Chambers, all the evidence indicates that Insp. Bill Doolan, retired and facing the end stages of cancer, shot himself in the heart. But Mike (The Big Bang, 2010, etc.) isn’t buying it, and it’s not long before new evidence bears him out. A waitress is killed in a senseless mugging only a few blocks from Doolan’s funeral. A friendly hooker who has dinner with Mike is struck by a hit-and-run driver who was obviously aiming for her companion. The waitress’s ex-boyfriend, who supposedly left town years ago, turns up dead. What can an aging private eye do? "I was older. I was jaded. I was retired," reflects Mike. "But I was still Mike Hammer." Naturally, he’s lionized by everyone in the Big Apple, from rookie Congressman Alex Jaynor to kinky ADA Angela Marshall to reformed crime-family scion Anthony ("don’t call me Little Tony") Tretriano, to hot Latina chanteuse Chrome, who sings in Anthony’s club, to Alberto Bonetti, the druglord whose son Sal Mike killed in self-defense. Sal will be followed into the great beyond by over two dozen souls, most of them sent hither by Mike. Working from an unfinished novel by the late Spillane, Collins provides the franchise’s trademark winking salacity, self-congratulatory vigilantism and sadistic violence, topped off with a climax that combines the final scenes of two of Mike’s most celebrated cases." --Kirkus Reviews