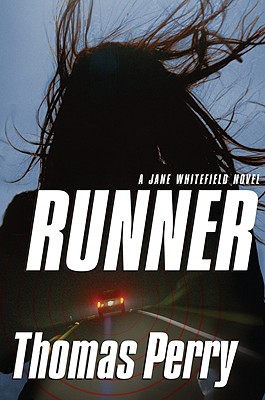 “Good people whose lives are threatened go to Jane Whitefield, a Native American guide, who gives them a new identity and teaches them how to successfully remain hidden and live their lives. Now married, and retired, Jane is again drawn into action when a young pregnant girl shows up desperately in need of help. Perry has created one of the most unique characters in the thriller genre.”
— Susan Wasson, Bookworks, Albuquerque, NM
View the List

Jane Whitefield--New York Times best-selling writer Thomas Perry's most popular character--returns from retirement to the world of the runner, guiding fugitives out of danger.
After a nine-year absence, the fiercely resourceful Native American guide JaneWhitefield is back, in the latest superb thriller by award-winning author Thomas Perry.
For more than a decade, Jane pursued her unusual profession: "I'm a guide . . . I show people how to go from places where somebody is trying to kill them to other places where nobody is."Then she promised her husband she would never work again, and settled in to live a happy, quiet life as Jane McKinnon, the wife of a surgeon in Amherst, New York. But when a bomb goes off in the middle of a hospital fundraiser, Jane finds herself face to face with the cause of the explosion: a young pregnant girl who has been tracked across the country by a team of hired hunters.That night, regardless of what she wants or the vow she's made to her husband, Jane must come back to transform one more victim into a runner. And her quest for safety sets in motion a mission that will be a rescue operation--or a chance for revenge.
Runner is Thomas Perry at the top of his form.

THOMAS PERRY is the author of the Jane Whitefield series as well as the best-selling novels "Nightlife, Death Benefits, "and "Pursuit, "the first recipient of the Gumshoe Award for Best Novel. He won the Edgar Award for "The Butcher's Boy, "and "Metzger's Dog "was a "New""York Times "Notable Book of the Year.

“Thomas Perry is, quite simply, brilliant. And as each book comes out he becomes more so.”—Robert B. Parker

“Nobody writes thrillers like Thomas Perry . . . His books are unpredictable, action-packed, and fueled by a cynical wit and observant eye for detail.”—San Francisco Chronicle

“Perry is so skillful with the old chase-and-pursuit routine, creates such interesting characters, and writes about them so tellingly, one wants more immediately, not next year—right now.”—Boston Globe