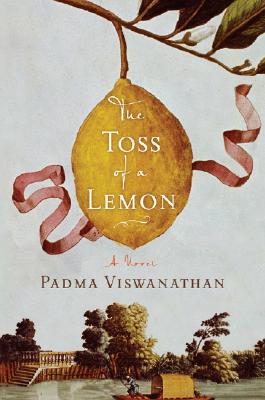 The Toss of a Lemon

“This book so wonderfully captures the life of one Indian woman and her family living through all the changes India undergoes in the first half of the 20th century. Padma Viswanathan has created characters you will care about, and gives fantastic descriptions of the food. Plan to eat Indian during your reading of this highly recommended book.”
— Lisa Sharp, Nightbird Books, Fayetteville, AR
View the List

The year of the marriage proposal, Sivakami is ten. She is neither tall nor short for her age, but she will not grow much more. Her shoulders are narrow but appear solid, as though the blades are fused to protect her heart from the back. She carries herself with an attractive stiffness: her shoulders straight and always aligned. She looks capable of bearing great burdens, not as though born to yoke but perhaps as though born with a yoke within her.

Spanning the lifetime of one woman (1896–1962), The Toss of a Lemon brings us intimately into a Brahmin household, into an India we’ve never before seen.

Married at ten, widowed at eighteen, left with two children, Sivakami must wear widow’s whites, shave her head, and touch no one from dawn to dusk. She is not allowed to remarry, and in the next sixty years she ventures outside her family compound only three times. She is extremely orthodox in her behavior except for one defiant act: She moves back to her dead husband’s house and village to raise her children. That decision sets the course of her children’s and grandchildren’s lives, twisting their fates in surprising, sometimes heartbreaking ways.Inspired by her grandmother's stories, Padma Viswanathan masterfully brings to life a profoundly exotic yet utterly recognizable family in the midst of social and political upheaval. The Toss of a Lemon is the debut of a major new writer.

Praise For The Toss of a Lemon…

ADVANCE PRAISE FOR THE TOSS OF A LEMON "This soaring new novel, inspired by the author's family history, will draw comparisons to The God of Small Things, but Viswanathan has a voice and a vision all her own."--Chatelaine magazine (Canada)

"The Toss of a Lemon is a captivating novel that in relating the story of one Indian woman and her family tells the story of a changing society. Precisely and deftly written, constantly interesting, morally serious yet sympathetic -- I challenge any reader to start reading this book and give up on it. It joins the company of the great novels on India."

"[Viswanathan''s] narrative, refreshingly, is free of anachronism, and she has a pleasing way of engaging the reader’s senses—not least with some mouth-watering descriptions of ''dry and wet curries, pacchadis of yogurt and cucumber…deep-fried patties of lentil and chili,'' and other such delicacies....Of a piece with the recent works of Vikram Seth, and reminiscent at times of García Márquez—altogether a pleasure." (Starred)