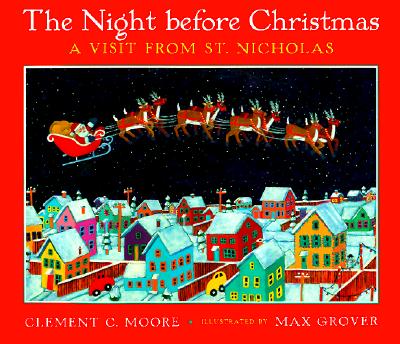 The Night before Christmas

A Visit From St. Nicholas

It is the night before Christmas. Every tree in the little Christmas tree lot has been sold--except one. The owner and his child lock up, then trudge through the snow to their house nearby; the family settles in for a "long winter's nap" . . . and the familiar verse about the most exciting night of the year begins. In this edition of "A Visit from St. Nicholas"--word for word the original verse by Clement C. Moore--the gifts of Christmas are shared with everyone, right down to the last little tree left alone in the snow-filled lot on Christmas Eve.

Wendy Watson has written and illustrated twenty-one children's books, and has illustrated more than sixty children's books by other authors.  She divides her time between Phoenix, Arizona, and Truro, Massachusetts.  For more information visit www.wendy-watson.com.

Clement Clarke Moore (July 15, 1779 - July 10, 1863) was a writer and professor and is credited with writing "A Visit from St. Nicholas" for his children. Originally published anonymously on December 23rd, 1823, the poem that would come to be known as "'Twas the Night Before Christmas," was responsible for the creation of the Santa Claus myth as it is known in the United States and much of the English-speaking world.