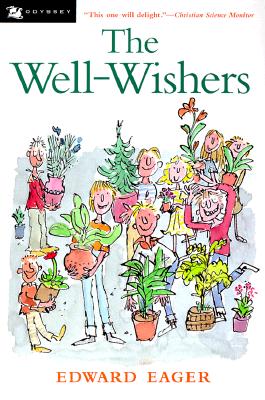 The Well-Wishers (Tales of Magic #6)

The wishing well is all used up, its magic drained, its enchantment gone dry.
Or has it?
In a reckless moment, Gordy threatens the old well, telling it to get going with its magic or else! and that seems to do the trick. Suddenly Laura, Lydia, James, and Kip—who feared their autumn would unfold without magic—are plunged into just the sort of outlandish adventures they'd longed for.
But is it really the well's magic that transforms troublemaker Dicky LeBaron from ne'er-do-well to hero? Or keeps Appledore's orchard—and love life—in bloom? Or sends James on a doubly daring rescue of a damsel in distress?
What does it matter? Sometimes the best kind of magic is the kind that isn't so magical at all. . . .

Praise For The Well-Wishers (Tales of Magic #6)…

"A keen insight into human behavior . . . , a subtle twist of humor, and an ability to hold action to a fast pace keep Mr. Eager's books well out in front for popularity and charm. This one will delight."  —Christian Science Monitor

“Delectable wordplay and a light, witty touch make these adventures pure delight. Deserves an exalted place on every bookshelf of classics.”  —Booklist