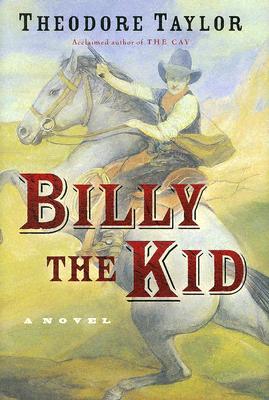 William H. "Billy the Kid" Bonney Jr. isn't afraid to take risks. But during a train heist near his hometown, the odds catch up with him when a passenger recognizes the nineteen-year-old outlaw. Fed up with Billy's bad ways, The Law sends its best man to bring him in: Sheriff Willis Monroe, Billy's own cousin and former best friend. But Willis isn't the only one on Billy's tail. The Kid's two-timing partners are hunting him, too--and a conniving posse wants Billy (and the sheriff!) dead.

This fictional tale of real-life legend Billy the Kid imagines William Bonney's fate had his life of crime taken a very different turn.

Includes an author's note about the real Billy the Kid.

Praise For Billy the Kid: A Novel…

THEODORE TAYLOR (1921-2006), an award-winning author of many books for young people, was particularly known for fast-paced, exciting adventure novels. His books include the bestseller The Cay, Timothy of the Cay, The Bomb, Air Raid--Pearl Harbor!, Ice Drift, The Maldonado Miracle, and The Weirdo, an Edgar Award winner for Best Young Adult Mystery.