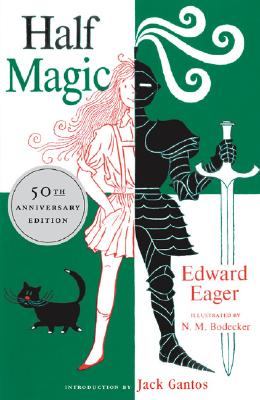 It all begins with a strange coin on a sun-warmed sidewalk.
Jane finds the coin, and becasue she and her sblings are having the worst, most dreadfully boring summer ever, she idly wishes something exciting would happen.
And something does: Her wish is granted.
Or not quite. Only half of her wish comes true.
It turns out the coin grants wishes—but only by half, so that you must wish for twice as much as you want.
Wishing for two times some things is a cinch, but other doubled wishes only cause twice as much trouble. What is half of twice a talking cat? Or to be half-again twice not-here? And how do you double your most heartfelt wish, the one you care about so much it has to be perfect?


Praise For Half Magic: Fiftieth-Anniversary Edition (Tales of Magic #1)…

“Half Magic is a funny, charming, timeless book, as much a pleasure to read to a child now as it was forty years ago. Those who had it read to them then may even have an obligation to pass on the pleasure.”  —The New York Times Book Review