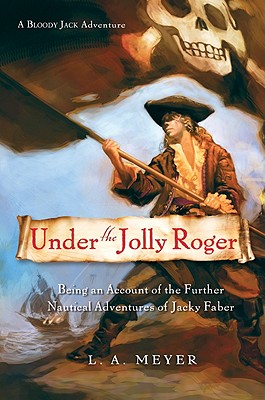 Under the Jolly Roger

A pirate at heart, unlikely heroine Jacky Faber returns to the sea in a truly swashbuckling tale filled with good humor, wit, and courage.

After leaving the Lawson Peabody School for Young Girls in Boston--under dire circumstances, of course--she boards a whaling ship bound for London, where she hopes to find her beloved Jaimy. But things don't go as planned, and soon Jacky is off on a wild misadventure at sea. She thwarts the lecherous advances of a crazy captain, rallies the sailors to her side, and ultimately gains command of a ship in His Majesty's Royal Navy. But Jacky's adventures don't end there. . . .

L. A. Meyer (1942–2014) was the acclaimed writer of the Bloody Jack Adventure series, which follows the exploits of an impetuous heroine who has fought her way up from the squalid streets of London to become an adventurer of the highest order. Mr. Meyer was an art teacher, an illustrator, a designer, a naval officer, and a gallery owner. All of those experiences helped him in the writing of his curious tales of the beloved Jacky Faber. Visit www.jackyfaber.com for more information on the author and his books.