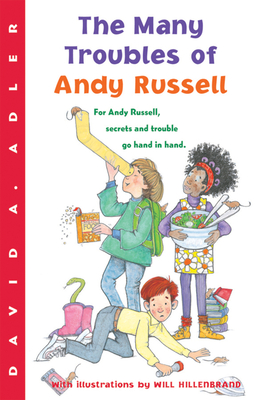 The Many Troubles of Andy Russell

David A. Adler, Will Hillenbrand (Illustrator)

Boy, does Andy have troubles! His gerbils escaped and are scampering all over the basement. He's late for school and he sure doesn't want to give that boring Ms. Roman another excuse to call his parents. And he planned to ask his parents today if his good friend Tamika could live with his family until her parents fully recover from a terrible accident. It is definitely not a good day for gerbil troubles. And when Andy learns that his mother is pregnant, he knows he'll have to do some really fancy footwork if his family is going to make room for Tamika. If gerbils threaten to foul up his plan, his meddlesome sister, Rachel, could make matters even worse. It's a good thing for Andy that he's charming and full of bright ideas. As this first chapter book in a new series unfolds, it's clear the Russell household is in for more trouble--and lots of fun!

Praise For The Many Troubles of Andy Russell…

"Adler shapes a cast that youngsters will want to follow." --Publishers Weekly

DAVID ADLER has written more than a hundred books, including Lou Gehrig: The Luckiest Man and Mama Played Baseball. He lives on Long Island, New York.

WILL HILLENBRAND has written and illustrated many award-winning picture books, including The House That Drac Built by Judy Sierra and his own Down by the Station. He lives in Terrace Park, Ohio.
Loading...
or
Not Currently Available for Direct Purchase