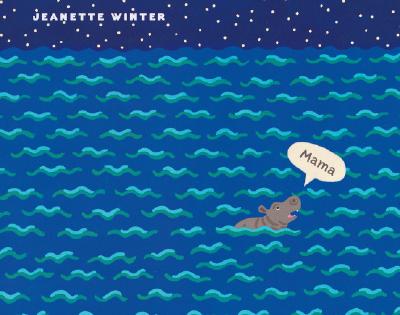 a TRUE story, in which a BABY HIPPO loses his MAMA during a TSUNAMI, but finds a new home, and a new MAMA

Set during the devastating tsunami of 2004, MAMA is the touching true story of a baby hippo that was separated from his mother when the wave hit. After struggling alone for several days, the baby was rescued by Kenyan wildlife officers and brought to live in an animal refuge. There, all by himself, he adopted a new "mother"--that just happened to be a 130-year-old giant male tortoise. And they've been inseparable ever since.

Although MAMA takes place against the backdrop of a terrible human tragedy, at the heart of this story is a moving and original tale of adoption--and of finding love and companionship in the least likely of circumstances.
Includes an author's note.

JEANETTE WINTER has written and illustrated many books for children, including MAMA, The Librarian of Basra, Calavera Abecedario: A Day of the Dead Alphabet Book, My Name Is Georgia, and Josefina. She lives in New York City.