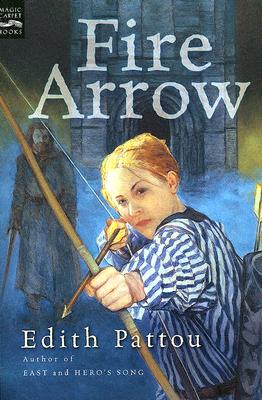 The Second Song of Eirren

Breo-Saight, the young archer from Hero's Song, has abandoned her lifelong mission to avenge her father's murder. But just as she stops pursuing the murderers, they turn up again, leading Brie to her birthright--a fire arrow.

The magical arrow leads Brie to a strange country, where she finds the family and happiness she's never known. But she also finds evil at work--the doings of a sinister, one-eyed sorcerer named Balor. Though Brie has given up on vengeance, she knows she must follow her mission through to its bitter end if she is to save the people she's grown to love.

Praise For Fire Arrow: The Second Song of Eirren…

“With sympathetic characterizations...fast pacing, a well-realized landscape, violent clashes, and all the expected elements of good fantasy, Pattou offers a rousing story....Add this to the Top Ten.”—Booklist
“Memorable and well-crafted.... The reader is left wanting another book....An excellent series.”—VOYA (5Q—highest rating)
“Vivid and lively and will appeal to many fantasy readers.”—School Library Journal
—