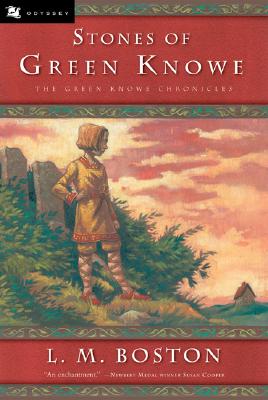 The Stones of Green Knowe

This last installment of the beloved series recounts the long-ago beginnings of Green Knowe, a time when Roger, the son of a Norman lord, was the first child to live in the grand old manor. Roger finds some ancient stones on the grounds, which magically transport him back and forth in time so he can meet and befriend Toby, Linnet, Susan, and Tolly--the future inhabitants of Green Knowe and the heroes of the five other magical books in the series.

Praise For The Stones of Green Knowe…

"Stands on its own as an intriguing time-shift fantasy, deftly blending the real and the fantastic . . . written with grace and conviction."--The Bulletin

"Magic and mystery combine . . . Boston is an effortless stylist and her magic seems as simple as breathing."--The Washington Post

LUCY MARIA BOSTON (1892-1990) purchased a ramshackle manor house near Cambridge, England, in 1935, which over a period of two years she lovingly restored. It is this house that inspired her, at the age of sixty-two, to take pen in hand and create the beloved Green Knowe series.
Loading...
or support indie stores by buying on