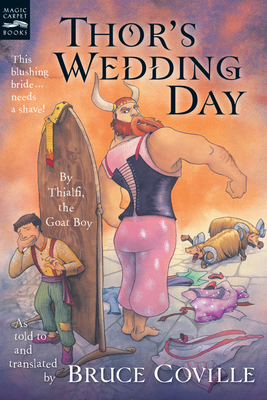 By Thialfi, the goat boy, as told to and translated by Bruce Coville

What could possibly make Thor--the massive and mighty god of thunder and protector of all his people--put on a bridal gown? It all begins when the source of Thor's power, his beloved hammer, is stolen. The plan to get it back requires that he dress in fancy finery and be packed off to marry the king of the giants. Luckily, Thialfi, the goat boy, comes along. Working behind the scenes, Thialfi just might save the day . . . which is only fair, because it's his fault the hammer was stolen in the first place.


Praise For Thor's Wedding Day: By Thialfi, the goat boy, as told to and translated by Bruce Coville…

BRUCE COVILLE is the author of over 100 books for children and young adults, including the international bestseller My Teacher is an Alien, the Unicorn Chronicles series, and the much-beloved Jeremy Thatcher, Dragon Hatcher. His work has appeared in a dozen languages and won children's choice awards in a dozen states. Before becoming a full time writer Bruce was a teacher, a toymaker, a magazine editor, a gravedigger, and a cookware salesman. He is also the creator of Full Cast Audio, an audiobook company devoted to producing full cast, unabridged recordings of material for family listening and has produced over a hundred audiobooks, directing and/or acting in most of them. Bruce lives in Syracuse, New York, with his wife, illustrator and author Katherine Coville.