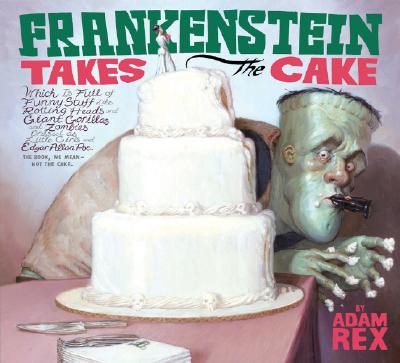 No one ever said it was easy being a monster. Take Frankenstein, for instance: He just wants to marry his undead bride in peace, but his best man, Dracula, is freaking out about the garlic bread. Then there’s the Headless Horseman, who wishes everyone would stop drooling over his delicious pumpkin head. And can someone please tell Edgar Allan Poe to get the door already before the raven completely loses it? Sheesh.
In a wickedly funny follow-up to the bestselling Frankenstein Makes a Sandwich, Adam Rex once again proves that monsters are just like you and me. (Well, sort of.)

Praise For Frankenstein Takes the Cake…

Praise for the bestselling Frankenstein Makes a Sandwich:

“With irreverent entries such as ‘Count Dracula Doesn’t Know He’s Been Walking Around All Night with Spinach in His Teeth,” this mash of monster poems will send kids howling (with laughter).” —Family Fun

(star) “Readers will relish every gross and hilarious entry in this monstrous menu of misadventures... Here’s a read-aloud candidate sure to elicit loud screams—but not of fright.” —Kirkus  Reviews(starred)

(star) “The book is fresh, creative, and funny, with just enough gory detail to cause a few gasps.  Kids will eat it up.” —School Library Journal  (starred)

(star) “Rex gives readers the pleasure of discovering punch lines on their own, and his droll, ultra-detailed paintings show he takes comedy seriously.” — Publishers Weekly (starred)

“The fiendishly funny picture book FRANKENSTEIN TAKES THE CAKE, by Adam Rex, is a compilation of silly rhymes and Mad Magazine-style gags paired with gently spooky illustrations. Especially hilarious are 'Off the Top of My Head: The Official Blog of the Headless Horseman' and a trio of Edgar Allan Poe spoofs featuring a couplet-savvy raven.” --Family Fun, October 2008

"With maniacal glee, Rex (Frankenstein Makes a Sandwich) delivers spot-on rhymes about B-movie monsters, loosely organized around the nuptials of Frankenstein and his bride. . . . Rex's eclectic imagery and freewheeling verse will have readers going back for seconds."
--Publishers Weekly, starred review (7/14/08)
— Publishers Weekly

ADAM REX is the author and illustrator of PSSST!, TREE RING CIRCUS, FRANKENSTEIN TAKES THE CAKE, and The New York Times bestseller FRANKENSTEIN MAKES A SANDWICH. He lives in Tucson, Arizona.
www.adamrex.com
Loading...
or
Not Currently Available for Direct Purchase