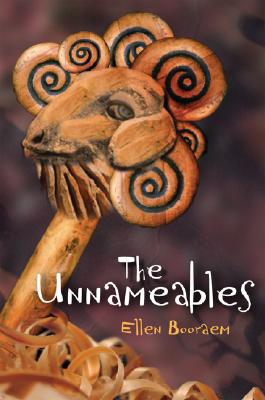 “The well-ordered, rigid home of foundling Medford Runyuin is an island called 'Island' because names should identify and usefulness is imperative. Feeling like an outcast, he struggles to conform until two very unconventional 'stinky' new friends enter his world and send everything awhirl. This is a marvelous tribute to change and creativity!”
— Kathy Carrigan, Harry W. Schwartz Bookshop, Brookfield, WI
View the List

Medford lives on a neat, orderly island called—simply—Island.
Islanders like names that say exactly what a thing (or a person) is or does. Nothing less.
Islanders like things (and people) to do what their names say they will. Nothing more.
In fact, everything on Island is named for its purpose, even the people who inhabit it. But Medford Runyuin is different. A foundling, he has a meaningless last name that is just one of many reminders that he's an outsider. And, to make matters worse, Medford's been keeping a big secret, one that could get him banished from Island forever.
When the smelliest, strangest, unruliest creature Island has ever seen comes barreling right into his rigid world, Medford can’t help but start to question the rules he’s been trying to follow his entire life.
A whimsical fantasy debut about belonging, the dangers of forgetting history, and the Usefulness of art, The Unnameables is one of the funniest stories of friendship you’ll ever read, with a cast of characters you’ll never forget.

Praise For The UNNAMEABLES HC…

"The novel’s humor and amiable tone make it a highly-accessible but thought-provoking read."--The Horn Book Magazine

"Avid readers in middle school and high school will enjoy a tale that combines magic with an almost puritanical culture."--VOYA (5Q4P)

é“Booraem’s debut is an ever-surprising, genre-defying page-turner. Realistic characters deal with philosophical problems in vivid, flowing prose that is evocative and often funny. A sort of combination of witch-trial–era Salem and The Giver, this book offers a treat with nearly every page turn.” Kirkus Reviews, starred review (9/01/08)
— Kirkus Reviews

ELLEN BOORAEM was an award-winning journalist for numerous Maine newspapers for thirty years until she decided to devote her time to her writing. She lives in Brooklin, Maine, where in addition to fiction writer, she is a mentor, writing coach, and substitute teacher. She is also a founding director of the Brooklin Youth Corps, a summertime self-esteem program for teenagers. The Unnameables is her first children’s novel.
Loading...
or
Not Currently Available for Direct Purchase