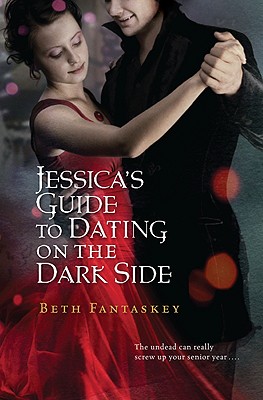 Jessica's Guide to Dating on the Dark Side (Hardcover)

“Things change for Jessica when Lucius Vladescu arrives from Romania claiming he is a vampire prince, destined to marry her to bring peace between two vampire clans. But just as Jessica starts to believe Lucius, he changes his mind - how confusing is that? Will she fight for him? Can she stop a vampire war? The many twists along the way keep you guessing right to the end.”
— Angela Mann, Kepler's Books & Magazine, Menlo Park, CA
View the List

The undead can really screw up your senior year . . .

Marrying a vampire definitely doesn’t fit into Jessica Packwood’s senior year “get-a-life” plan. But then a bizarre (and incredibly hot) new exchange student named Lucius Vladescu shows up, claiming that Jessica is a Romanian vampire princess by birth—and he’s her long-lost fiancé. Armed with newfound confidence and a copy of Growing Up Undead: A Teen Vampire’s Guide to Dating, Health, and Emotions, Jessica makes a dramatic transition from average American teenager to glam European vampire princess. But when a devious cheerleader sets her sights on Lucius, Jess finds herself fighting to win back her wayward prince, stop a global vampire war—and save Lucius’s soul from eternal destruction

Beth Fantaskey is the author of Jessica's Guide to Dating on the Dark Side, Jessica Rules the Dark Side, Jekel Loves Hyde, and Buzz Kill. Shelives in rural Pennsylvania with her husband and two daughters. Visit her website at www.bethfantaskey.com.


Praise For Jessica's Guide to Dating on the Dark Side…

"Jessica evolves nicely with each new shocking revelation, becoming, over the course of the novel, an intriguing and strong protagonist . . . romance buffs will find the ultimate pairing of Lucius and Jessica absolutely irresistible, and it's downright swoonworthy once their elaborate courting ritual begins in earnest."— The Bulletin

* "A romance involving a high school girl and a handsome vampire may sound a little too familiar, yet this first novel quickly bursts ahead of the pack of Twilight-wannabes . . . The romance sizzles, the plot develops ingeniously and suspensefully, and the satire sings."— Publishers Weekly, starred review

"Fantaskey sustains a wholly believable contemporary teen world against a backdrop of vampire romance—Jessica and her friends look and talk like real teens, and her wry sense of humor is delightful, especially when describing an archrival who has her eye on Lucius. Girls obsessed with vampires and romance will welcome this clever, amusing take on teen vamps in love."— Booklist

"Fantaskey’s fast-paced story is full of plot twists and turns that keep readers guessing until the very end. The story is highly entertaining with plenty of action, drama, romance, as well as self-discovery." — School Library Journal