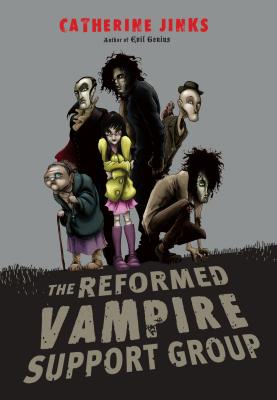 Think vampires are romantic, sexy, and powerful? Think again. Vampires are dead. And unless they want to end up staked, they have to give up fanging people, admit their addiction, join a support group, and reform themselves.
Nina Harrison, fanged at fifteen and still living with her mother, hates the Reformed Vampire Support Group meetings every Tuesday night. Even if she does appreciate Dave, who was in a punk band when he was alive, nothing exciting ever happens. That is, until one of group members is mysteriously destroyed by a silver bullet. With Nina (determined to prove that vamps aren't useless or weak) and Dave (secretly in love with Nina) at the helm, the misfit vampires soon band together to track down the hunter, save a werewolf, and keep the world safe from the likes of themselves.
The perfect anecdote to slick vampire novels, this murder-mystery comedy of errors will thrill fans of Evil Genius.

"Jinks’s signature facility with plot and character development is intact as she turns to the topic of vampires . . . Throwing in delicious details and aperçus, the author works her way from the murder of one of the vampires to suspense and adventure of the sinister yet daffy variety beloved by readers of Evil Genius. The plot twists, more ornate than in previous works, ramp up the giddiness—and, perhaps, camouflage the corpses, blood and other byproducts of the genre."  —Publishers Weekly, starred review

"Support Group is truly like no other vampire story. It is witty, cunning, and humorous, with numerous plot twists and turns. Jinks has conjured up an eccentric but believable cast of characters in a story full of action and adventure."  —School Library Journal

"Jinks's quirky sense of humor will appeal to fans of her Evil Genius series. Those tired of torrid bloodsucker stories or looking for a comic riff on the trend will feel refreshed by the vomitous, guinea-pig-drinking accidental heroics of Nina and her pals."  —Kirkus Reviews

"Jinks draws her characters and their unique challenges in great detail . . . there’s plenty of blood and guts (both types) to go around. One part problem novel, one part comedy, and one part murder-mystery, this alternative vampire story is for outsiders of all kinds, underground or otherwise." —Horn Book

“Jinks takes readers on a wild ride, poking wicked fun at vampire enthusiasts of all stripes with her wryly clinical take . . . a first-rate comedy with equal appeal for avid vampire fans and those who wouldn’t be caught dead with a copy of Twilight.”  —The Bulletin

"With this budding heroine in her own right at the forefront, this ensemble of eccentric characters gives a wry spin to the ever-popular vampire tales."  —BookPage