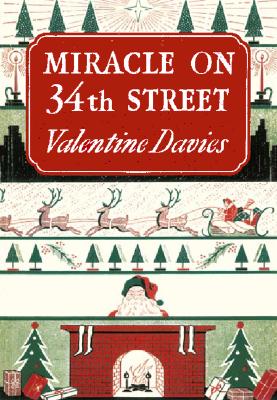 Generations of believers in hope and goodwill have made Valentine Davies' Miracle on 34th Street a treasured part of their holiday traditions. Millions of copies of this award-winning story have sold since its first publication in 1947, delighting readers of all ages. A facsimile edition of the book is now faithfully re-created, offering a new generation--and fans of the original--the beauty of the classic 1940s design. Details of how the book came to be written, and made into a beloved film, are included in a brief historical note.

“A good-hearted story about an enduring Christmas vision that never fails to fill the most jaded child with wonder.”—Newsweek
“This charming fairy tale for children of all ages centers around an old man who thinks he is Santa Claus. It makes a lot more sense than most of us would like to admit.”—Newsweek
“Reading the funny, touching fantasy may become a Yuletide habit like watching the movie.”—Publishers Weekly
“A highly recommended family or classroom read-aloud, this should quickly claim, as the film has, its own well-deserved niche for many holiday celebrations ahead.”—Booklist (boxed review)
“A splendid story.”—The New York Times Book Review

VALENTINE DAVIES (1905-1961) was a prominent Hollywood screenwriter. He was president of the Academy of Motion Picture Arts and Sciences and a member of the Writers Guild of America, which now presents the Valentine Davies Award as one of its highest honors.
Loading...
or
Not Currently Available for Direct Purchase