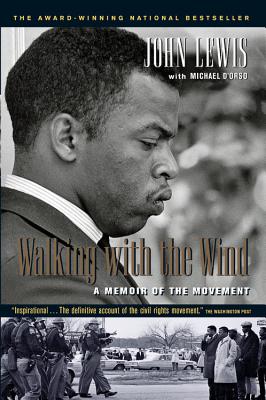 Walking with the Wind

A Memoir of the Movement

Congressman John Lewis takes readers inside the civil rights movement in Walking with the Wind and shares rare insight into the personalities at its heart.

As Chairman of the Student Nonviolent Coordinating Committee (SNCC), Congressman John Lewis was at the epicenter of the civil rights movement in the late '50s and '60s. Arrested more than forty times, he was one of its youngest and most courageous leaders. Writing with charm, warmth, and honesty, Lewis moves from the Nashville lunch counter sit-ins as he reflects on the era to the Edmund Pettus Bridge in Selma, Alabama, where he led more than five hundred marchers on what became known as "Bloody Sunday." Though there have been exceptional books on the movement, Lewis's profound personal story is "destined to become a classic in civil rights literature" (Los Angeles Times).


Praise For Walking with the Wind: A Memoir of the Movement…

"Publication of Walking with the Wind is a literary event, for sure. This is the definitive account of the civil rights movement. . . . It is impossible to read this inspirational and hideous story of courage and cruelty without being moved. -the Washington Post "John Lewis evokes, with simplicity and passion, how the 1960s transformed the United States. . . . Powerful."-the New York Times Book Review
"For those too young to remember and those too old to forget, for everyone of race, we owe a debt of gratitude to this American hero, and the nameless, frightened (but ultimately fearless) multitudes that walked with him down those rugged roads of history." -Pittsburgh Post-Gazette