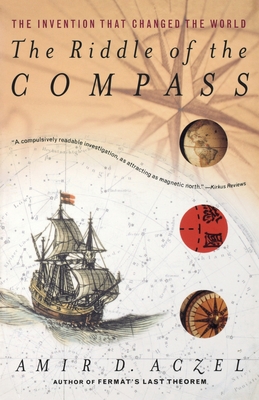 The Riddle of the Compass

The Invention that Changed the World

The story of the compass is shrouded in mystery and myth, yet most will agree it begins around the time of the birth of Christ in ancient China. A mysterious lodestone whose powers affected metal was known to the Chinese emperor. When this piece of metal was suspended in water, it always pointed north. This unexplainable occurrence led to the stone's use in feng shui, the Chinese art of finding the right location. However, it was the Italians, more than a thousand years later, who discovered the ultimate destiny of the lodestone and unleashed its formidable powers. In Amalfi sometime in the twelfth century, the compass was born, crowning the Italians as the new rulers of the seas and heralding the onset of the modern world. Retracing the roots of the compass and sharing the fascinating story of navigation through the ages, The Riddle of the Compass is Aczel at his most entertaining and insightful.

Praise For The Riddle of the Compass: The Invention that Changed the World…

PRAISE FOR THE RIDDLE OF THE COMPASS

"An uncommonly good book about an invention that--there's just no getting around it--changed the world."--Jonathan Yardley, The Washington Post
"A compulsively readable investigation, as attracting as the magnetic north."--Kirkus Reviews

Amir D. Aczel, Ph.D. grew up on a ship and was navigating straits in the Mediterranean long before he could drive a car. The author of Fermat's Last Theorem, God's Equation, The Mystery of the Aleph, and Probability 1, he lives with his wife and daughter in the Boston area and teaches at Bentley College.
Loading...
or support indie stores by buying on