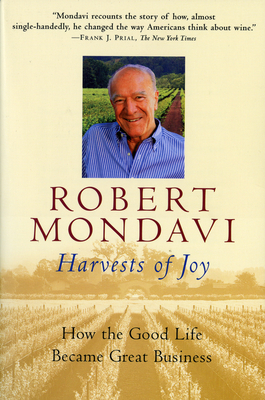 In this autobiography of the founder of the internationally celebrated winery in Napa Valley, Robert Mondavi shares his inspirational story.


In 1965, after a notorious family feud, Robert Mondavi––then 52 years old–– was thrown out of his family's winery. Far from defeated, Mondavi was dedicated to a vision of creating a superior wine.

What has happened since that fateful day is one of the greatest sucess stories of American business. The Robert Mondavi Winery is respected around the world, and Mondavi is the man who is most responsible for the worldwide recognition of American winemaking, as well as changing America's palate for fine wine and fine food.

In Harvests of Joy, Mondavi shares how, through his passion for excellence, he achieved this extraordinary position, one he reached not without pain and sacrifice. With invaluable insider tips on his approach to both winemaking and to running a business, Mondavi's story is "a grand example of the fact that in America you can pretty much be, do, or accomplish whatever you set out to." (Ventura County Star)


Praise For Harvests of Joy: How the Good Life Became Great Business…

“No one has been more closely associated with the California wine revolution than Robert Mondavi. Probably because he started it."-the New York Times
“The hottest wine book for holiday gift-giving is Robert Mondavi's new autobiography Harvests of Joy."-The Ottawa Sun
“For businessmen and dreamers, here's business advice mixed with inspirational enthusiasm from a man who . . . built himself into a world-recognized symbol of quality California wine."-Wine & Spirits

Robert Mondavi (1913–2008) founded the Robert Mondavi Winery, one of the most respected wineries in the world. He was the recipient of numerous honors and awards, including Winemaker of the Year and the Harvard Business School Association Business Leader of the Year.
Loading...
or support indie stores by buying on