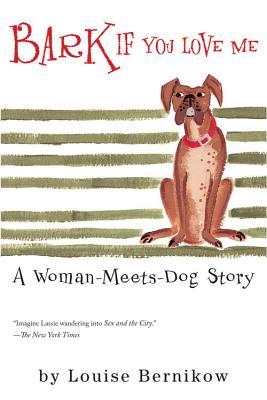 Bark If You Love Me

A single city woman meets Mr. Right-he has amber eyes and a wily heart. There's only one catch . . . he has four legs and a tail.

Relatively indifferent to the natural world, allergic to dogs, and happily independent, writer Louise Bernikow never had a pet and knew nothing about caring for one. But one day while running along Manhattan's Hudson River, she came across an abandoned boxer. He had a gimpy leg and a dim past, but Bernikow instantly, bewilderingly, did the one thing her mother always warned her not to do-she brought the strange male home.

Here is the comical and offbeat story of their first year together. Libro, as she comes to call him (for "book," in Spanish), introduces her to the curious world of dog runs and dog people, and to a local dive where the bartender pulls pints from the tap and dog biscuits from the drawer. Bernikow, in turn, introduces Libro to the eccentric neighbors and to life as a media hound. When they meet a handsome man and his equally handsome dachshund,
life takes an unexpected turn for both of them.

Wonderfully written and captivating to the last, this is a remarkable tale of companionship.

Praise For Bark If You Love Me…

Imagine Lassie wandering into Sex and the City."-The New York Times
Bridget Jones but with less angst and more heart, and cut-to-the-quick
observations that make this more than just a dog story . . . it's a story about
life's possibilities."-Orlando Sentinel
A charming tale."-San francisco chronicle

Louise Bernikow is the author of six books, including Among Women and The Shoulders We Stand On: The American Women's Almanac. She has written articles for such publications as the New York Times, Playboy, Ms., Cosmopolitan, and Esquire. A frequent guest lecturer on women's issues at colleges throughout the country, Louise Bernikow lives in New York City with her dog, Libro.
or support indie stores by buying on