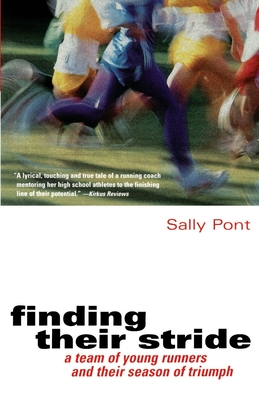 A Team of Young Runners and Their Season of Triumph

In Finding Their Stride, Sally Pont, a runner, teacher, and second-generation coach, tells of her first year coaching a co-ed cross country team to victory, both on and off the course. A surprising story of triumph, as well as an endearing tale of driven athletes, Pont shares the highlights and heartbreak of her young runners at Moravian Academy, a small, independent school near Bethlehem, Pennsylvania. Every page is infused with Pont's affection and respect for her runners, and as the season unfolds, we see the team beginning to find a new stride. While the boys struggle, the girls soar to new heights, going from last place to first. “Uplifting and engaging, Finding Their Stride is "about attaining and teaching excellence, whose metaphor happens to be a high school running team" (Kirkus Reviews).

Sally Pont teaches English at Moravian Academy, in Bethlehem, Pennsylvania, where she is associate dean of students. She holds an M.F.A. in writing from Penn State, where she studied with Paul West.

Praise For Finding Their Stride: A Team of Young Runners and Their Season of Triumph…

"Moravian Academy's cross country team has a coach capable of orchestrating a championship season and an author who can chronicle the journey."—Associated Press
"A beautiful, affecting book. Clean and pure and honest and loving. My hat's off to a wonderful new writer."—Buzz Bissinger, author of Friday Night Lights
or support indie stores by buying on
Copyright © 2020 American Booksellers Association