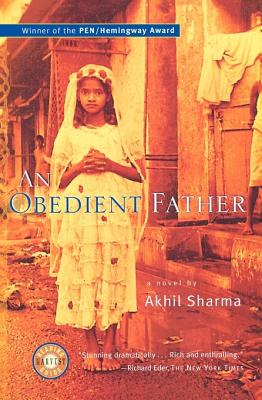 A stunning novel about family secrets, hailed nationwide
as a masterpiece.

Ram Karan, a corrupt official in the New Delhi school system, lives in one of the city's slums with his widowed daughter and his little granddaughter. Bumbling, sad, ironic, Ram is also a man corroded by a terrible secret. With the assassination of the politician Rajiv Gandhi, Ram is plunged into a series of escalating and possibly deadly political betrayals. As he tries to save his family, his daughter reveals a crime he had hoped was long buried-and Ram, struggling to survive, must make amends after a life of deception. Taking the reader deep into a world of Indian families and politics, gangsters and movie stars, riots and morgues, An Obedient Father is an astonishing fiction debut, a work of rare sensibilities that presents a character as tormented, funny, and morally ambiguous as one of Dostoyevsky's antiheroes.


Praise For An Obedient Father…

A stunning work that is both personal and political . . . perhaps the novel that, some might say, Arundhati Roy had wanted to write when she wrote
The God of Small Things."-The Nation
The themes of crime and punishment that Sharma explores so tellingly make
the parallels with Dostoyevsky's masterpiece compelling and instructive. . . .
That this novel is a debut is an astonishment."-Dan Cryer, Newsday
A cunning, dismaying and beautifully conceived portrait of a corrupt man
in a corrupt society."-Richard Eder, The New York Times