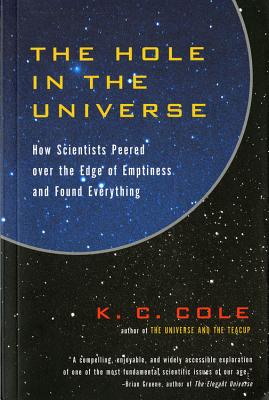 The Hole In The Universe

How Scientists Peered over the Edge of Emptiness and Found Everything

An adventure into the heart of Nothing by best-selling author K. C. Cole.

Once again, acclaimed science writer K. C. Cole brings the arcane and academic down to the level of armchair scientists in The Hole in the Universe, an entertaining and edifying search for nothing at all. Open the newspaper on any given day and you will read of a newly discovered planet, star, and so on. Yet scientists and mathematicians have spent generations searching the far reaches of the universe for that one elusive state—nothingness.

Although this may sound like a simple task, every time the absolute void appears within reach, something new is discovered in its place: a black hole, an undulating string, an additional dimension of space or time—even another universe. A fascinating and literary tour de force, The Hole in the Universe is a virtual romp into the unknown that you never knew wasn't there.

Praise For The Hole In The Universe: How Scientists Peered over the Edge of Emptiness and Found Everything…

PRAISE FOR THE HOLE IN THE UNIVERSE
As clear and accessible as Hawking's A Brief History of Time, this work deserves wide circulation, not just among science buffs."
-Publishers Weekly (starred review)
Cole has plenty of experience making the most abstruse theories intelligible to
the lay reader. . . . A clever and readable investigation."-New York Post
—

A popular science columnist for the Los Angeles Times and teacher at UCLA, K.C. Cole is a recipient of the 1995 American Institute of Physics Award for Best Science Writing. She is also the author of the internationally bestselling The Universe and the Teacup, First You Build a Cloud, and The Hole in the Universe. Cole lives in Santa Monica, California.