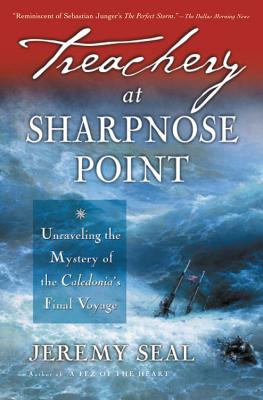 Unraveling the Mystery of the Caledonia's Final Voyage

While walking through a cliff-top graveyard in the town of Morwenstow on the coast of Cornwall, the author encounters a wooden Scottish figurehead that once adorned the Caledonia, a ship wrecked on the English coast in 1842. Through further investigation, Seal begins to suspect the townspeople, and chiefly the town's parson, Robert Hawker, for the Caledonia's demise on the jagged shores below. Though no one has ever been brought to court for "wrecking"--luring ships ashore to loot the cargo--it's a commonly held belief that this sort of cruelty did take place. But, is that what happened in Morwenstow?
Having meticulously researched maritime logs, broadsides of the day, and other first-hand documents, Seal weaves history, travelogue, and imaginative reconstruction in this marvelous piece of detective work, bringing us a mystery of the best kind--the sort that really did happen.

Praise For Treachery at Sharpnose Point: Unraveling the Mystery of the Caledonia's Final Voyage…

"Seal tells fascinating stories and complements them with lore that is funny . . . and mesmerizing."--Men's Journal

PRAISE FOR TREACHERY AT SHARPNOSE POINT

"Exceptional . . . Seal's riveting story will be a certain winner."--Booklist

Jeremy Seal has written for numerous English newspapers. His first book, A Fez of the Heart, was chosen as a Publishers Weekly Best Book of the Year and short-listed for the Thomas Cook Travel Book Award. His second book, The Snakebite Survivor's Club, was a New York Public Library Exceptional Book of the Year. He lives in Bath, England, with his wife and daughters.
Loading...
or support indie stores by buying on