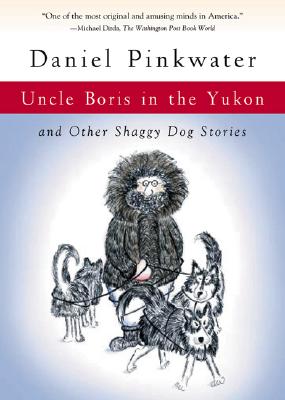 Uncle Boris in the Yukon (Paperback)

and Other Shaggy Dog Stories

With the candor and wit that he's known for, Daniel Pinkwater shares heartfelt and often peculiar reflections on the dogs (and other assorted creatures) that have shaped his life and family traditions. Pinkwater begins with the tale of his colorful Uncle Boris, who sets off on a trek from Warsaw to the Yukon in search of gold. Along the way he strikes up a curious friendship with Jake, the lead dog in his team of malamutes, who, as it happens, converses in perfect Yiddish. This is the first in a series of delightful anecdotes that introduce a curious cast of canines, including a couple of wolf breeds, a Labrador retriever, a few more malamutes, a chow chow, a mutt, and even a Pekinese, among others.
A "mordantly funny and smartly entertaining mix of memoir and fancy" (Booklist), Uncle Boris in the Yukon shows us a world where, though Pinkwater is top dog, it's the four-legged companions who steal the show.

Daniel Pinkwater is regarded by critics, educators, psychologists, and law enforcement agencies as the world's most influential writer of books for children and young adults, and has also written several books for adults. Since 1987, he has been a regular commentator on National Public Radio's "All Things Considered." He lives in Hyde Park, New York.

Praise For Uncle Boris in the Yukon: and Other Shaggy Dog Stories…

PRAISE FOR UNCLE BORIS IN THE YUKON

"Daniel Pinkwater's reminiscences about the dogs who have shared his life flick by with the warmth, humor, self-recognition and yes, dammit, love of a family album."--Scott Simon, host of NPR's Weekend Edition

"[Pinkwater] possesses one of the most original and amusing minds in America."--Michael Dirda, The Washington Post Book