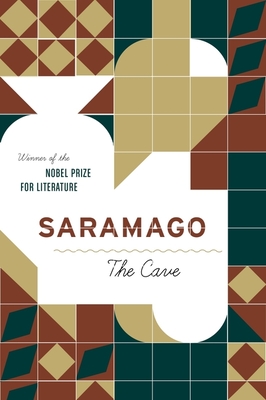 “[The Cave] is yet another triumph . . . for Portugal’s, or even the world’s, greatest novelist. Read it.” — Washington Post
A genuinely brilliant novel.” — Chicago Tribune

Cipriano Algor, an elderly potter, lives with his daughter Marta and her husband Marçal in a small village on the outskirts of The Center, an imposing complex of shops and apartments to which Cipriano delivers his wares. One day, he is told not to make any more deliveries. Unwilling to give up his craft, Cipriano tries his hand at making ceramic dolls. Astonishingly, The Center places an order for hundreds. But just as suddenly, the order is canceled and the penniless three have to move from the village into The Center. When mysterious sounds of digging emerge from beneath their new apartment, Cipriano and Marçal investigate; what they find transforms the family’s life. Filled with the depth, humor, and extraordinary philosophical richness that marks all of Saramago’s novels, The Cave is one of the essential books of our time.


Praise For The Cave…


"[The Cave] is yet another triumph. . . Read it."—The Washington Post Book World

“Saramago is arguably the greatest writer of our time . . .A genuinely brilliant novel.”—Chicago Tribune

“One expects nothing less than another masterpiece from a remarkable writer.”—The Boston Globe

“This is both a meditation on the heartlessness with which modern society absorbs the individual, and a compassionate study of loyalty, love, and the ways in which people face the forces trying obliterate their spirit.”—Francine Prose, People

"Another masterpiece from a remarkable writer who really may be, as many readers believe, the greatest living novelist."

"Arguably the greatest writer of our time. He throw[s] a dazzling flash of lightning on his subjects."

"The teensiest bit of plot is meaningfully, accessibly stretched into something enormous."

"We'll say it again: Saramago is the finest novelist, bar none."

"Loving collaboration that insists on the value of independence and a firm belief that art can't be separated from life."

"A compassionate study of loyalty, love and the ways in which people face the forces trying to obliterate their spirit."

"Saramago says he is really an essayist who took to writing novels. This is true. But the novels are masterly."