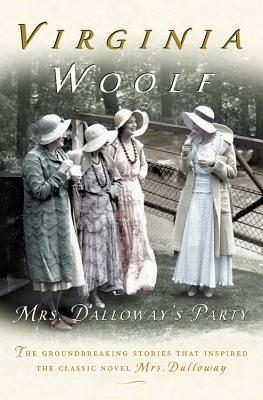 "Mrs. Dalloway said she would buy the gloves herself. Big Ben was striking as she stepped out into the street. It was eleven o'clock and the unused hour was fresh as if issued to children on a beach."
-from "Mrs. Dalloway in Bond Street"

The landmark modern novel Mrs. Dalloway creates a portrait of a single day in the life of Clarissa Dalloway as she orchestrates the last-minute details of a grand party. But before Virginia Woolf wrote this masterwork, she explored in a series of fascinating stories a similar revelry in the mental and physical excitement of a party.
Wonderfully captivating, the seven stories in Mrs. Dalloway's Party create a dynamic and delightful portrait of what Woolf called "party consciousness." As parallel expressions of the themes of Mrs. Dalloway, these stories provide a valuable window into Woolf's writing mind and a further testament to her extraordinary genius.

PRAISE FOR MRS. DALLOWAY
"With Mrs. Dalloway Virginia Woolf insisted that a life of errands and party-giving was every bit as viable a subject as any life lived anywhere; and that should any human act in any novel seem
unimportant, it has merely been inadequately observed. The novel as an art form has not been the same since."-Michael Cunningham, author of The Hours
—

VIRGINIA WOOLF (1882–1941) was one of the major literary figures of the twentieth century. An admired literary critic, she authored many essays, letters, journals, and short stories in addition to her groundbreaking novels, including Mrs. Dalloway, To The Lighthouse, and Orlando.
Loading...
or support indie stores by buying on