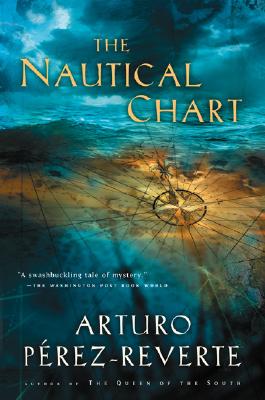 Coy is a sailor without a ship.Tánger Soto is a woman with an obsession to find the Dei Gloria, a ship sunk during the seventeenth century, and El Piloto is an old man with the sailboat on which all three set out to seek their fortune together. Or do they?

Praise For The Nautical Chart…

PRAISE FOR THE NAUTICAL CHART
“A work whose intentional, delicious, and old-fashioned blurring of
the distinction between high literature and pop entertainment entitles
it to a space of its own in that library—and in yours.”
—NEW YORK MAGAZINE

Arturo P+rez-Reverte is an internationally acclaimed author and his books have been translated into nineteen languages in thirty countries and sold more than three million copies worldwide. He was born in 1951 in Spain, where he still lives.
or support indie stores by buying on