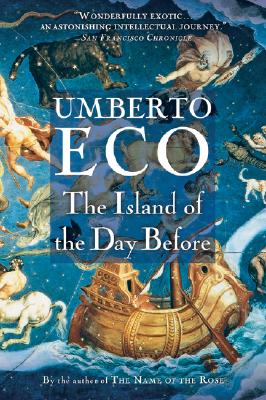 The Island of the Day Before

After a violent storm in the South Pacific in the year 1643, Roberto della Griva finds himself shipwrecked-on a ship. Swept from the Amaryllis, he has managed to pull himself aboard the Daphne, anchored in the bay of a beautiful island. The ship is fully provisioned, he discovers, but the crew is missing.

As Roberto explores the different cabinets in the hold, he remembers chapters from his youth: Ferrante, his imaginary evil brother; the siege of Casale, that meaningless chess move in the Thirty Years' War in which he lost his father and his illusions; and the lessons given him on Reasons of State, fencing, the writing of love letters, and blasphemy.

In this fascinating, lyrical tale, Umberto Eco tells of a young dreamer searching for love and meaning; and of a most amazing old Jesuit who, with his clocks and maps, has plumbed the secrets of longitudes, the four moons of Jupiter, and the Flood.

Praise For The Island of the Day Before…

PRAISE FOR THE ISLAND OF THE DAY BEFORE

"As wonderfully exotic as only Eco can contrive . . . An astonishing intellectual journey."--San Francisco Chronicle