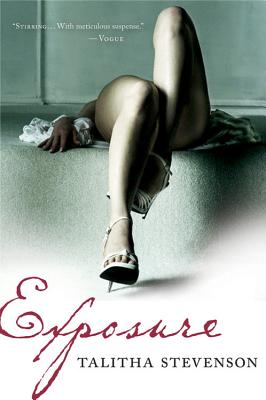 Alistair Langford, a respected and powerful barrister, has been hiding his past since he left his hometown of Dover to study at Oxford in the late 1950s. Embarrassed by his working-class upbringing in a guesthouse run by his single mother, with whom he has not had any contact for forty years, he has lied about himself to everyone in his life since Oxford, including his wife, Rosalind, and his two children, Luke and Sophie. But after the death of his mother and a one-night stand with a devious defense witness, his tightly woven tapestry of lies begins to unravel.

Exposure is a deftly plotted, psychologically suspenseful, and compulsively readable novel from one of the most exciting young fiction writers today.

"Class consciousness, sexual obsession, and familial issues make for queasy yet engaging bedfellows in Exposure by Talitha Stevenson . . . Stevenson writes with a careful grace, and an emotional honesty that is wise well beyond her 28 years."--New York Post

"[Exposure] confirms the young English author's uncanny flair for psychological plots. . . . With meticulous suspense, Stevenson sends her four Langfords down their seemingly doomed paths only to grant them each his or her own revelatory--and believable--happiness."--Vogue

TALITHA STEVENSON has written for the Daily Mail and the Guardian. She has lived and studied in Oxford, Florence, and London. Her fiction includes An Empty Room, Exposure, and Disappear.
Loading...
or support indie stores by buying on