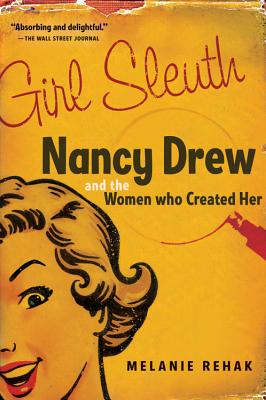 Nancy Drew and the Women Who Created Her

A plucky “titian-haired” sleuth solved her first mystery in 1930. Eighty million books later, Nancy Drew has survived the Depression, World War II, and the sixties (when she was taken up with a vengeance by women’s libbers) to enter the pantheon of American girlhood. As beloved by girls today as she was by their grandmothers, Nancy Drew has both inspired and reflected the changes in her readers’ lives. Here, in a narrative with all the vivid energy and page-turning pace of Nancy’s adventures, Melanie Rehak solves an enduring literary mystery: Who created Nancy Drew? And how did she go from pulp heroine to icon?

The brainchild of children’s book mogul Edward Stratemeyer, Nancy was brought to life by two women: Mildred Wirt Benson, a pioneering journalist from Iowa, and Harriet Stratemeyer Adams, a well-bred wife and mother who took over as CEO after her father died. In this century-spanning story, Rehak traces their roles—and Nancy’s—in forging the modern American woman.

Praise For Girl Sleuth: Nancy Drew and the Women Who Created Her…

"Witty, fast-paced, and smart, Girl Sleuth makes the story behind Nancy Drew as much fun to read as the mystery novels themselves. It's superb."- Jean Strouse , author of Morgan
—

Melanie Rehak is a poet and critic. A recipient of the New York Public Library's Tukman Fellowship at the Cullman Center for Scholars and Writers, she writes for the New York Times Magazine, the New Yorker, Vogue, and the Nation, among others. She lives in Brooklyn.