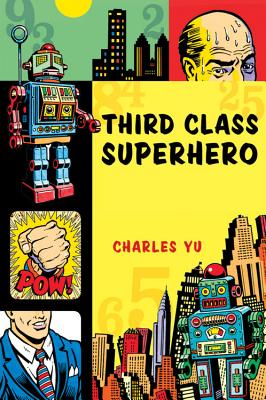 Charles Yu experiments with form and genre to explore the stories we tell ourselves while navigating contemporary life. In "Third Class Superhero," a would- be good guy must come to terms with the darkness in his heart. A couple living in the Luxury Car Commercial subdivision in "401(k)" are disappointed when their exotic vacation turns into a Life Insurance/Asset Management pitch. The author struggles to write the definitive biography of his mother in "Autobiographical Raw Material Unsuitable for the Mining of Fiction." In these and other stories, Yu’s characters run up against the conventions and parameters of their artificial story lines while tackling the terrifying aspects of existence: mothers, jobs, spouses, the need to express feelings.

"'Class Three Superhero' transcends what might have been a merely clever premise to speak to us about ambition, envy and the moral dilemmas that our own worst natures force on us. I admire it very much."--Jean Thompson, National Book Award Finalist

"Rich with humor, invention, and humanity . . . Yu emerges as a first-class talent. A."

"Reminds one of Kafka, if Kafka had had a geekish passion for science fiction and TV . . . hilarious."
— Los Angeles magazine

"[Yu] show[s] that the short story is not only alive but being reinvigorated in excitingly diverse ways."
— Frank Egerton

Charles Yu is the author of How to Live Safely in a Science Fictional Universe, which was named one of the best books of the year by Time magazine. He received the National Book Foundation’s 5 Under 35 Award for his story collection Third Class Superhero, and was a finalist for the PEN Center USA Literary Award. His work has been published in The New York Times, Playboy, and Slate, among other periodicals.
Loading...
or
Not Currently Available for Direct Purchase