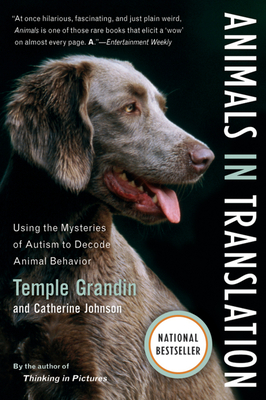 Using the Mysteries of Autism to Decode Animal Behavior

I don't know if people will ever be able to talk to animals the way Doctor Doolittle could, or whether animals will be able to talk back. Maybe science will have something to say about that. But I do know people can learn to "talk" to animals, and to hear what animals have to say, better than they do now. --From Animals in Translation

Why would a cow lick a tractor? Why are collies getting dumber? Why do dolphins sometimes kill for fun? How can a parrot learn to spell? How did wolves teach man to evolve? Temple Grandin draws upon a long, distinguished career as an animal scientist and her own experiences with autism to deliver an extraordinary message about how animals act, think, and feel. She has a perspective like that of no other expert in the field, which allows her to offer unparalleled observations and groundbreaking ideas.

People with autism can often think the way animals think, putting them in the perfect position to translate "animal talk." Grandin is a faithful guide into their world, exploring animal pain, fear, aggression, love, friendship, communication, learning, and, yes, even animal genius. The sweep of Animals in Translation is immense and will forever change the way we think about animals.

Among its provocative ideas, the book:
argues that language is not a requirement for consciousness--and that animals do have consciousness applies the autism theory of "hyper-specificity" to animals, showing that animals and autistic people are so sensitive to detail that they "can't see the forest for the trees"--a talent as well as a "deficit" explores the "interpreter" in the normal human brain that filters out detail, leaving people blind to much of the reality that surrounds them--a reality animals and autistic people see, sometimes all too clearlyexplains how animals have "superhuman" skills: animals have animal geniuscompares animals to autistic savants, declaring that animals may in fact be autistic savants, with special forms of genius that normal people do not possess and sometimes cannot even see examines how humans and animals use their emotions to think, to decide, and even to predict the future reveals the remarkable abilities of handicapped people and animals maintains that the single worst thing you can do to an animal is to make it feel afraid


Praise For Animals in Translation: Using the Mysteries of Autism to Decode Animal Behavior…

PRAISE FOR ANIMALS IN TRANSLATION

"Neurology has Oliver Sachs, nature has Annie Dillard, and the lucky animal world has Grandin, a master intermediary between humans and our fellow beasts . . . Animals is one of those rare books that elicits a 'wow' on almost every page. A."--Entertainment Weekly


"Neurology has Oliver Sachs, nature has Annie Dillard, and the lucky animal world has Grandin, a master intermediary between humans and our fellow beasts . . . At once hilarious, fascinating, and just plain weird, Animals is one of those rare books that elicits a 'wow' on almost every page. A."

"Inspiring . . . Crammed with facts and anecdotes about Temple Grandin's favorite subject: the senses, brains, emotions, and amazing talents of animals."

"Grandin's focus in Animals in Translation is not on all the 'normal' things autistics and animals can't do but on the unexpected, extraordinary, invaluable things they can."

CATHERINE JOHNSON, Ph.D., is a writer specializing in neuropsychiatry and the brain. She cowrote Animals in Translation and served as a trustee of the National Alliance for Autism Research for seven years. She lives with her husband and three sons—two of whom have autism—in New York.

TEMPLE GRANDIN is one of the world’s most accomplished and well-known adults with autism. She is a professor at Colorado State University and the author of several best-selling books, which have sold more than a million copies. The HBO movie based on her life, starring Claire Danes, received seven Emmy Awards.