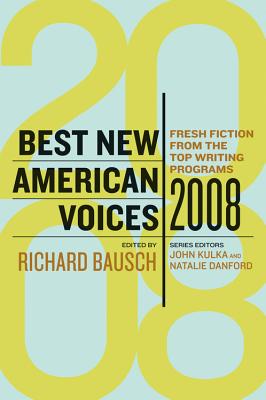 Critically acclaimed novelist and short story writer Richard Bausch continues the tradition of identifying the best young writers on the cusp of their careers in this year’s volume of Best New American Voices. Here are stories culled from hundreds of writing programs such as the Iowa Writers’ Workshop and Johns Hopkins and from summer conferences such as Sewanee and Bread Loaf—as well as a complete list of contact information for these programs. This collection showcases tomorrow’s literary stars: Julie Orringer, Adam Johnson, William Gay, David Benioff, Rattawut Lapcharoensap, Maile Meloy, Amanda Davis, Jennifer Vanderbes, and John Murray are just some of the acclaimed authors whose early work has appeared in this series since its launch in 2000. The best new American voices are heard here first.

"These ambitious stories reflect the imaginations of a generation and are a sneak preview of coming attractions in fiction."--Chicago Tribune (Editor's Choice)

"Demonstrates the potent force of American writers emerging from such distinguished writing programs as Bread Loaf and Sewanee. These collected works draw the reader into varied worlds of experience."--Elle

John Kulka is executive editor-at-large at Harvard University Press and lives in Connecticut.

Natalie Danford is a freelance writer and book critic whose work has appeared in People, Salon, the Los Angeles Times, the Chicago Sun-Times, and many other publications. She is the author of a novel, Inheritance, and lives in New York City.
Loading...
or support indie stores by buying on