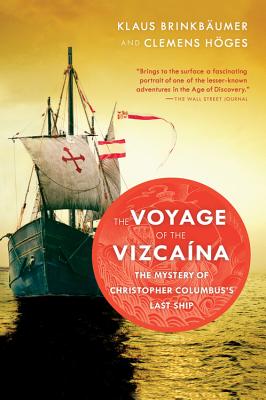 The Voyage of the Vizcaina

Of all the great seafaring vessels of the Age of Discovery, not one has been recovered or even—given the lack of detailed contemporary descriptions—accurately represented. Then, in the mid-1990s, a sunken ship was found in a small, shallow gulf off the coast of Panama. Chronicling both dramatic history and present-day archaeological adventures, Klaus Brinkbäumer and Clemens Höges reveal this artifact to be not only the oldest shipwreck ever recovered in the Western Hemisphere but also very likely the remains of the Vizcaína, one of the ships Christopher Columbus took on his last trip to the New World. The Voyage of the Vizcaína gives us an exciting tale of exploration and discovery, and the startling truths behind Columbus’s final attempt to reach the East by going west.

Praise For The Voyage of the Vizcaina: The Mystery of Christopher Columbus's Last Ship…

PRAISE FOR THE VOYAGE OF THE VIZCAÍNA

"Brings to the surface a fascinating portrait of one of the lesser-known adventures in the Age of Discovery."—THE WALL STREET JOURNAL

KLAUS BRINKBÄUMER writes for Der Spiegel magazine. A graduate of the University of California, Santa Barbara, he is an experienced sailor and diver. He lives in Germany.

CLEMENS HÖGES is a senior editor at Der Spiegel, where he has written extensively about underwater archaeology, seafaring, and piracy. He lives in Germany.
Loading...
or support indie stores by buying on