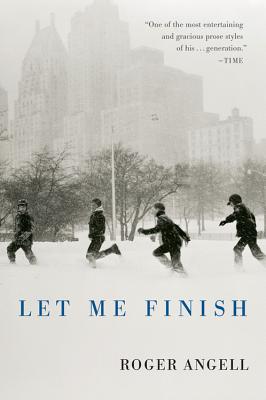 Widely known as an original and graceful writer, Roger Angell has developed a devoted following through his essays in the New Yorker. Now, in Let Me Finish, a deeply personal, fresh form of autobiography, he takes an unsentimental look at his early days as a boy growing up in Prohibition-era New York with a remarkable father; a mother, Katharine White, who was a founding editor of the New Yorker; and a famous stepfather, the writer E. B. White.

Intimate, funny, and moving portraits form the book’s centerpiece as Angell remembers his surprising relatives, his early attraction to baseball in the time of Ruth and Gehrig and DiMaggio, and his vivid colleagues during a long career as a New Yorker writer and editor. Infused with pleasure and sadness, Angell’s disarming memoir also evokes an attachment to life’s better moments.

Praise For Let Me Finish…

PRAISE FOR ROGER ANGELL AND LET ME FINISH

"One of the most entertaining and gracious prose styles of his gracious generation."—TIME

"A lovely book and an honest one . . . it contains truths: about loyalty and love, about work and play, about getting on with the cards that life deals you. It’s also a genuinely grown-up book, a rare gem indeed in our pubescent age."—THE WASHINGTON POST BOOK WORLD

ROGER ANGELL joined The New Yorker as a fiction editor in 1962. He is the author of seven celebrated baseball books, including Game Time: A Baseball Companion. He lives in New York and Maine.